It has been a little while since I last posted.
I would like to take this time
to blame it on Mother Nature
and her beasts. 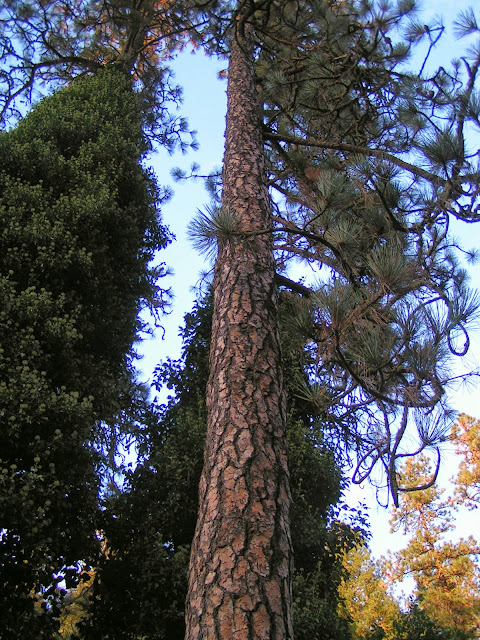 For the past 6? nights we have been awaken
by our canine alarm system sometime
between midnight and 3AM.
He is only about 10 months old, but
he has a big dog bark.
The first couple nights,
we told him to be quiet after
seeing that there was 'nothing there.'
Well, about night 2 or 3,
Mr. LB went out to take a look
and saw 2 raccoons.
The next day we borrowed
the neighbor's live trap.
That night we caught one,
and the little Seam-Ripper (Rip for short)
had the other 4 (yep, that's 5 all together) treed.
The following two nights,
we caught a big boar that the
cage would not contain.
Then we caught one more before
the neighbor said he needed the trap back
because his brother had a pack rat.
So finally, last night, we thought we just might
get some sleep - HA!
As we were getting ready to go to bed,
that trusty alarm went off.
Mr. LB went out and thought
he would see another raccoon.
On the lowest limb of the poor innocent tree (shown above)
that has now served as a fort to a number
of wild critters, was a bear.
It was only about a two year old so
not as big as many we see.
These trees are right behind the house, mind you.
We called the neighbor knowing he has a tag to fill.
He's holding out for a bigger one.
Being exhausted from being awake for however
many nights now,
we decided to leave it and go to bed. 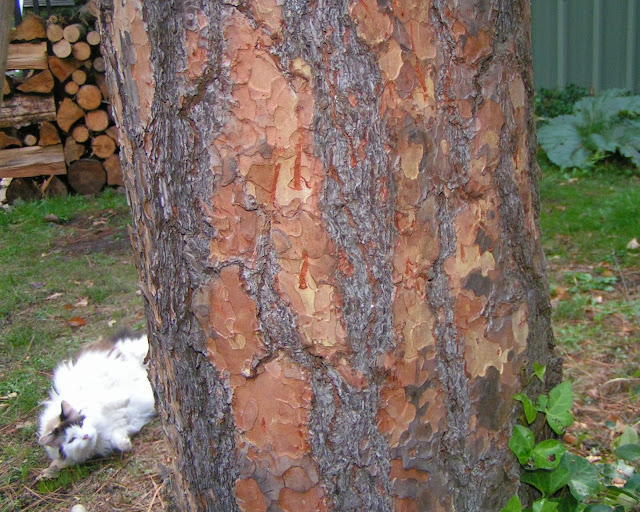 You can see the claw marks in the bark.
I don't have pictures of the raccoons or the bear,
because it was night time,
and I just wanted to sleep.
(Ignore the fur covered basket ball rolling around trying to get your attention:)
I will try to post something more exciting-
wait, maybe less exciting and something
a little more on the normal side, soon.
Maybe we will get to sleep through the night tonight.

Until then,
Nimble Fingers and Even Stitches
Posted by Lady Locust at 6:46 PM 8 comments:

I could have waited to post this until February,
but that's just not how things work around here. 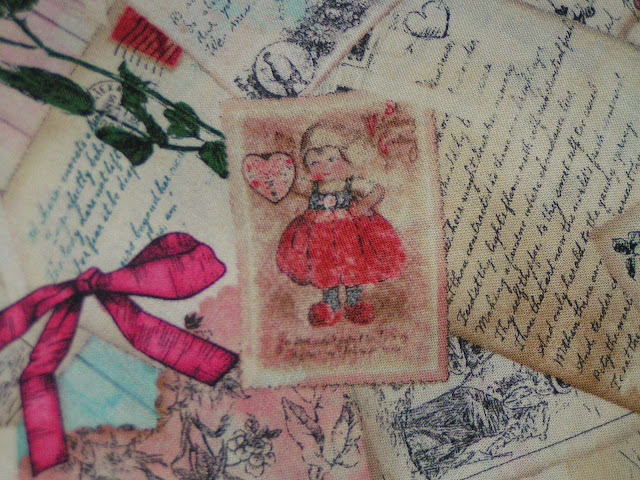 I'm a firm believer in cloth napkins, real plates,
sitting at the table to eat.
I know "gasp" right?
Mr. LB laughs at me for using 1/2 paper towel
which is actually pretty seldom.
These Valentine napkins have been cut out
since before last Valentine's Day.
They are finally stitched up.
At least they are ready for next year:) 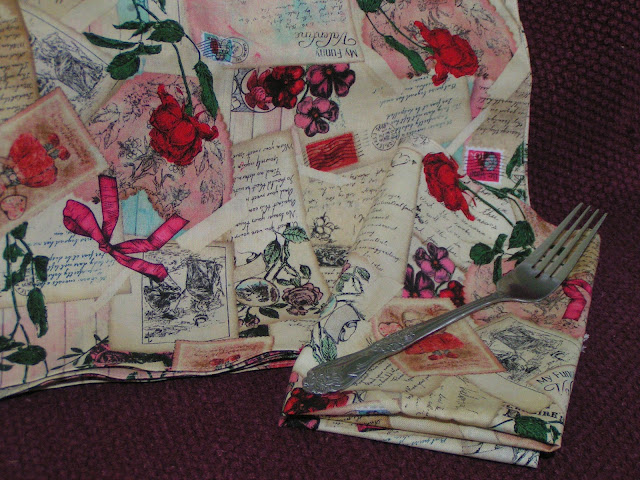 This time of year,
I tend to do the nesting thing.
Clean house, get some clutter out, organize a little,
and finish up 'little projects.'
It's amazing how after doing this,
the clutter reappears, more projects pup up, and
there's more to be done.
Maybe there are little elves that come at night
and rather than doing work,
they create work.

Until next time,
Nimble Fingers and Even Stitches
Posted by Lady Locust at 6:53 PM 8 comments:

Give a Guy a Tractor part 2

Yes, evidently there is a part two.
If you remember,
this all started by deciding to scrape the good
top soil out before putting gravel under the lean-to.
You can see that on Part 1 here. 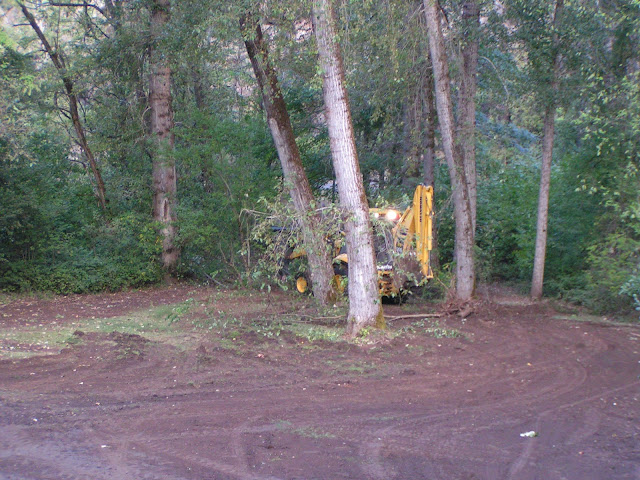 I've decided this is the ultimate
snowball project.

This is our lawn. 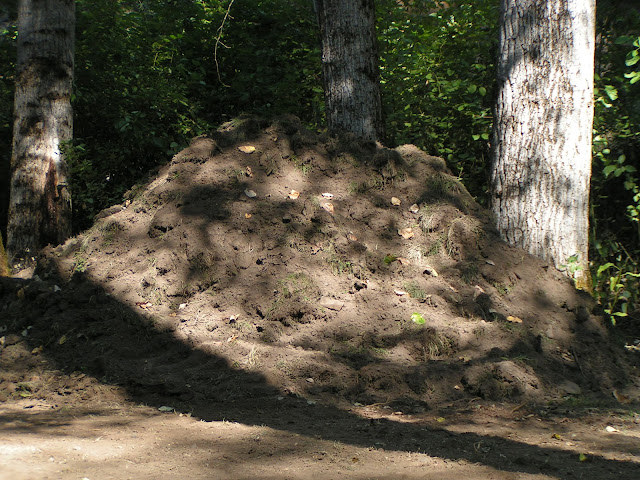 I am now hearing the phrases
"smooth as a golf course,"
and
"won't spill your coffee,"
in reference to the lawn.

I figured out when a guy gets a tractor,
the neighbor guys want to bring their tractors
over to play in the yard as well.
"We might as well get those stumps out
while it's torn up."
"It would sure be nice to clean up
the side along the river."
"Do you want this tree here?"
"Oh my." 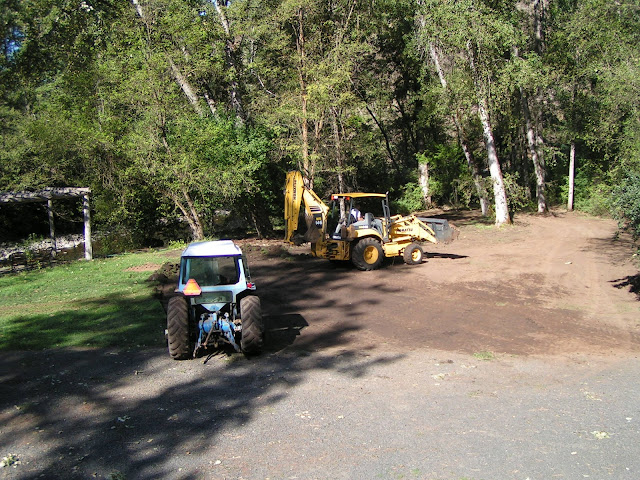 We are now down to two, and this is
the current state of the yard. 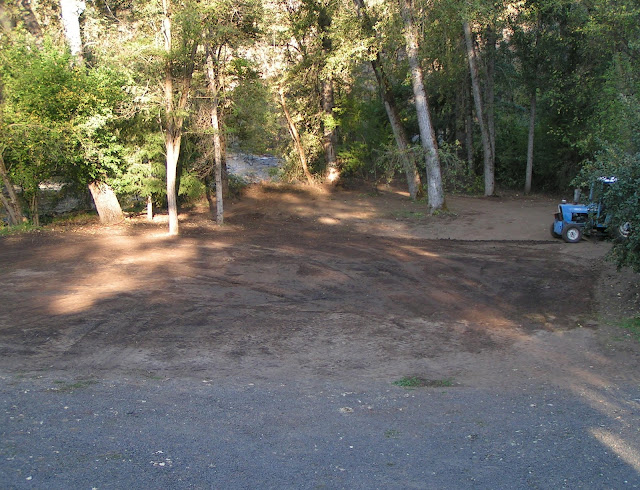 I do have to say I am eternally grateful to the neighbors.
The only hard part is the timing & funding.
We still need to get firewood in and
(now's the funny part)
get gravel for under the lean-to.

Until next time,
Nimble Fingers and Even Stitches
Posted by Lady Locust at 10:45 AM 4 comments: 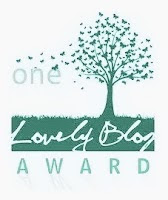 I received the One Lovely Blog Award
from Kathy at
Moving on to the Past
If you haven't visited her blog,
I would encourage you to do so.
She is very kind-hearted, and it shows
through in her posts.

I am now supposed to tell you 7 things
that you might not know about me.
Hmmm...
A little scary.

1.
Some of you might know (or not) that
I was raised on a ranch and now live in
the mountains, but I so love the gypsy style.
Like this~ 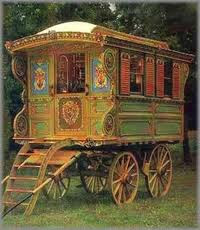 Isn't it just grand?
Can't you just imagine the inside
with velvet cushions and shiny dingle-dangles?
The clothes are just as beautiful to me.

2.
I like reading books about cleaning house.
Yep, really.
'Home Comforts' is a very useful one.

3.
If I were stranded on an island
and could only have one food,
it would be
Skippy creamy peanut butter.

4.
I raised sheep for years.
When I was a youngin', I was in 4-H and usually
had weathers for market lambs.  One year,
I had a ewe lamb.  My folks weren't there when I sold
so afterwards I was on the phone with my mom.
Mom: "How much per pound?"
"That's a good price"
"You did good."
Me: crying "I want her back."
They (Mom and Dad) must have seen it coming.
Mom: "See if she is going for resale."
She was!  I went to the guy at the gate
to the HUGE holding pen where there were
probably about 200 stressed out lambs.
I told the guy, "I get to buy her back."
He got this startled look on his face and said,
"But Honey how will we find her?"
Over the ruckus of all those lambs I belted out
"DOOOLLLLLLLY"
From the other side of that huge pen,
Dolly made a bee-line towards me.
The fella said, "Well, that was easy," with a big grin.
I had Dolly a long time.  She was a good ewe.

5.
I ran into another vehicle when I took my
driving test in high school.
(It was just a little dent in an old farm truck, and
the owners reply was that it added character.)

6.
I probably say, "Thank you, God"
about 50 times a day.
I nearly always get green lights,
good parking spaces, win raffles, etc.
Mr. LB doesn't and gets red lights,
far away parking, trains, etc.
I don't think it's a coincidence. 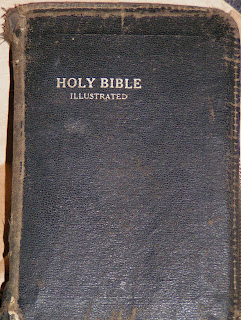 7.
My greatest talent, if you can call it such,
is that I've always been easy around animals.
My son and middle niece also have that.
I once got a half grown wild kitten/cat
and named her Cuddles ~
It turned out to be a good name for her.
I'm sure I've caused my folks a couple grey hairs
haltering and grooming un-broke colts,
being in 'the bull pasture,'
and just dealing with critters in general.
I think the worse thing an animal
has ever done to me is step on my toe.
Just for general public safety, I will add
that I'm not stupid about it.
I have a great respect for 2000 pound bulls,
bear sows with cubs, and
a cornered critter of any kind.

I'm not certain just how interesting all that is.
None of it is really secret - silly really -
just things I wouldn't normally share.

We survived!
We went without grains, sugar,
chemicals, preservatives, & monotrisurtablepshaekhra???

Today, I had ketchup on my hamburger.
Happy me.

Mr. LB gets a Blackberry-peach crisp
and homemade vanilla ice-cream. 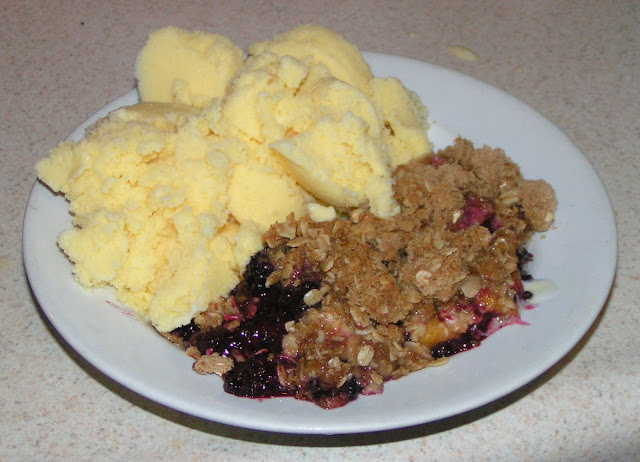 (Never mind the bit that spilled on the counter.)
We did well at sticking to it.
It was most difficult when traveling or
attending any sort of event.
Everything served was either sugar
or preserved/processed.  Trying not
to be rude and still eat was a challenge.

I will preface this by saying that neither of us
is really 'over weight.'
We could lose a couple pounds, but
not more than 10-20 max.
Mr. LB lost 10-15 lbs. and actually had to
begin eating a little oatmeal in the mornings
after about 3 1/2 weeks.
He was loosing too much and
couldn't eat enough in a day to keep his energy up.
He did notice that his joints
were virtually painless even
after a day of about 65 miles on a dirt-bike.

I lost about 8 lbs.  My energy was fine -
or at least not drained.
He works a lot harder than I do.
What I noticed was that
I got tired of eating and not feeling
full or satisfied.

We will continue to move towards organic,
and unprocessed whenever possible.
As I become a better gardener and canner,
that might be easier:)
I have plenty to learn.
Mr. LB is going to continue to
keep grains to a minimum.

One of the things we missed most
was cheese - just regular chemical-laden cheddar (or colby-jack.)
Next, was just the completion of the dish-
like rice, pasta, or tortillas.
(Tacos without shells are really difficult to eat with your fingers.)
It's strange how we are trained to what the whole flavor is
or have preconceptions about a complete meal.

We have been lucky in that our lettuce
is still going, cucumbers and tomatoes are coming on,
corn from friends, berries in the front yard,
and plums everywhere.

It has been a worthy trial and
one that we will continue at times
and at other times just keep in mind as we eat
a taco with our hands:)

Until next time,
Nimble Fingers and Even Stitches
Posted by Lady Locust at 6:10 AM 3 comments: