"We need to just throw that stack of boards on the on the burn pile."
Those were the words of Mr. LB in reference to my stack of miscellaneous boards that I've had for - err, uh-hem, well, not sure how long.
They are stacked behind the shop, under the lean-to taking up valuable covered  (dry in the winter) space.
My response: Internally = Gassssp! Cough! Sputter!
Out loud= I'll get on that ASAP.
So as part of the "Make the Stack of Scrap Disappear" effort,
I made a set of small shelves for the pantry. 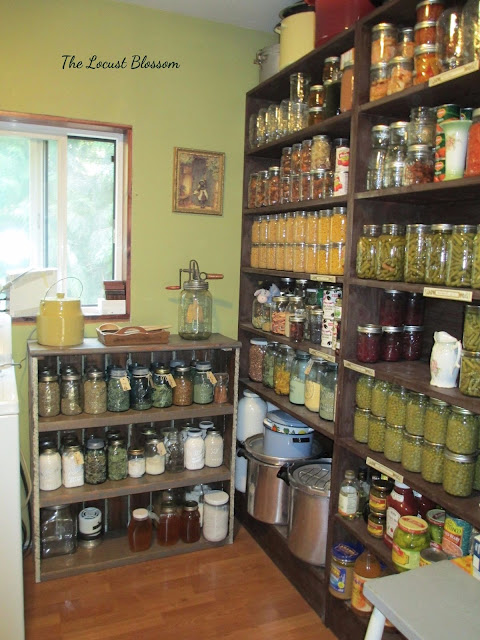 I've been having to rearrange with every season
keeping empty jars and longer-term canned goods out in the shop.
The first step was to pull out boards to see what I had enough of
then think about how I could put them together to make them work.
For the shelf parts, I used 2X10s that had a coat of grey enamel on them.
I got the paint stripper out and started on those. 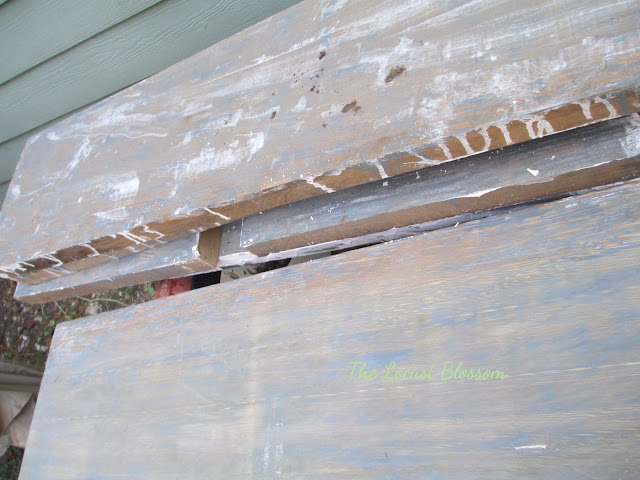 Once I got the thick part of the enamel off, I took a sander to them.
Then for the sides and back, I used old 1X4s that are old enough that they are actually 4 inches wide. 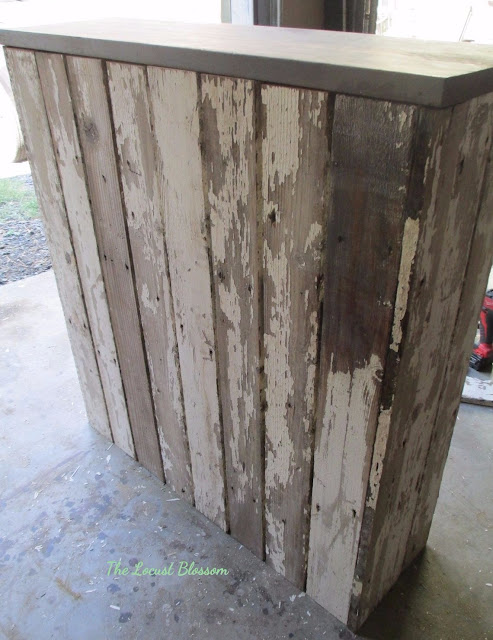 They had been dark green at one time then white at another time
though it was difficult to tell for sure since most the paint had chipped away. 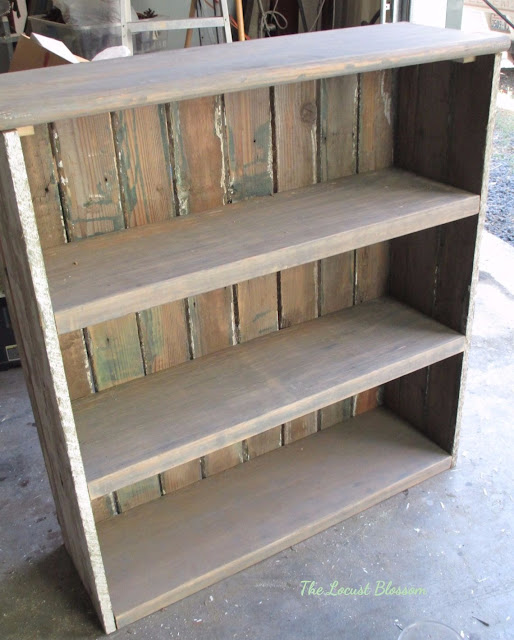 I did measure my existing pantry shelves
since I wanted the space between the shelves to be about 1/2" more
so I could stack two small-mouth pint jars if need be.
I decided it was going to have a rustic or primitive look to it
no matter what I did so just ran with it.
Once I got it assembled, I took the sander to it one more time
just to knock off any extra loose chipping paint.
Then I wiped it all down and put a coat of polyurethane on it.
I know I was going for rustic,
but A: it will be in the house and B: it will be holding food type items
so I wanted it to be sealed and washable.
Surprisingly, it went together pretty easily. 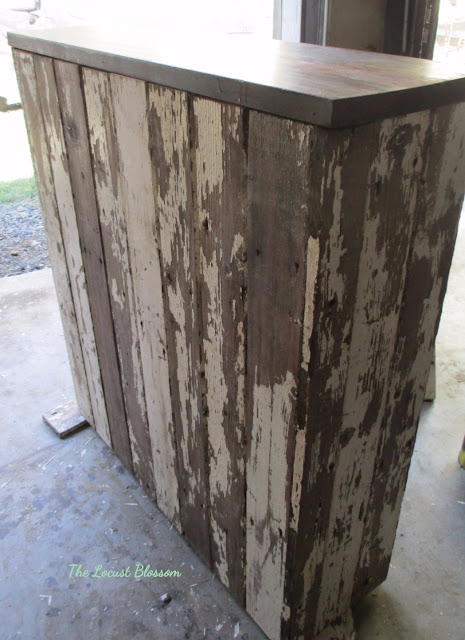 I was concerned about getting it square since that can be a challenge at times,
but I must have done something right this time. 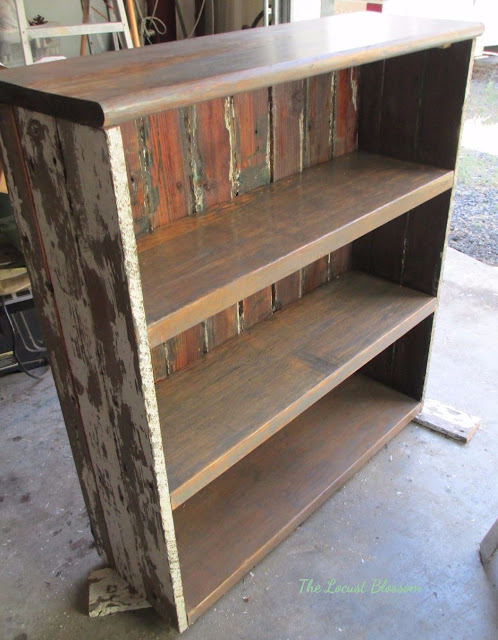 It's now in the house and I am working on rearranging the pantry yet again.
With any luck, we will be doing tomatoes soon so will be adding those
as well as spaghetti sauce and chili during the same time. 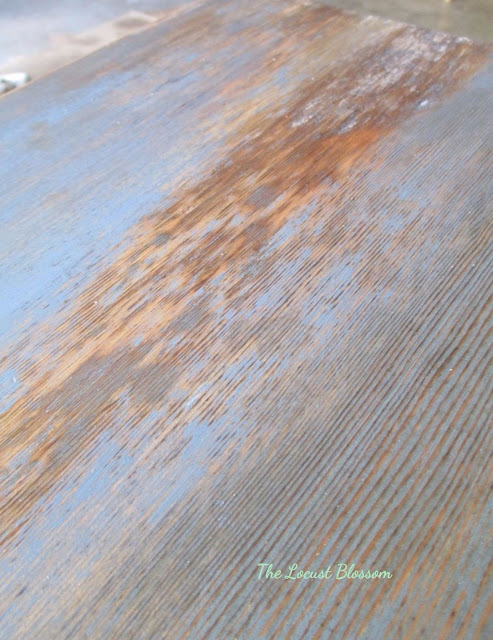 Never mind that this is where the unsightly internet router is and that there is still no trim on the window.
Evidently, utility room window trim is pretty low on the priority list.
I was going to do it before taking these pictures,
but we are out of the correct stain so will have to get more
in order to finish that project. 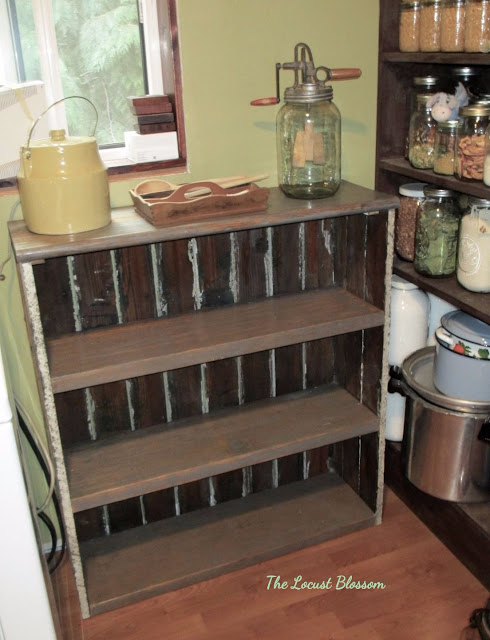 In the mean time,
my stack of scrap lumber is dwindling which I'm sure Mr. LB appreciates.
By the way,
he likes the shelves and how they turned out.
That kinda surprised me since he doesn't usually care for such a look.
In the end (or for now at least,) I decided to put my herbs and such
on this shelf and have the food items on the big shelves.
As the season progresses, we'll see if it remains functional.
One thing is sure nice, I like having more room
in the house and up off the floor.

Just a few posts back, I shared about our decluttering of not just the house,
but the shop and yard as well.
I've since been working in the shop to try to make it
a bit more manageable and functional.
In doing so, I have discovered more to eliminate - good grief!
But it really is good.
I've taken 3 car loads to donation and have one more trip to go.
I've also made a pile to go to the dump - ugh!
The good news is that among the "stuff" I've been sorting and cleaning,
I found them. 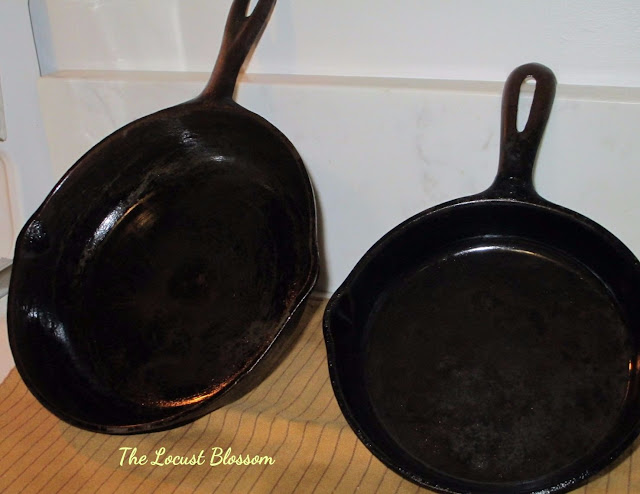 Not that they were really lost, just forgotten.
These two cast iron pans have been out in the shop since we moved here.
I took a wire wheel to them, then some hot soapy water,
then seasoned them well. 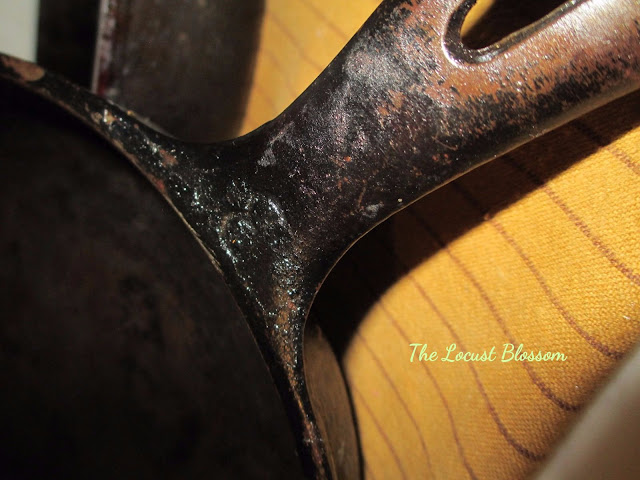 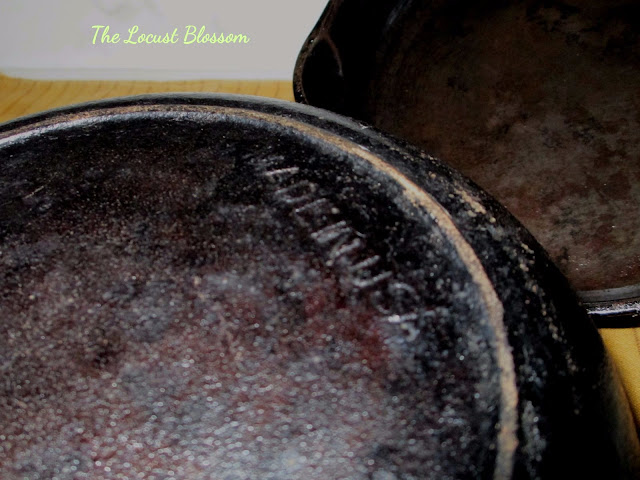 We love cast iron!
So why was it their fate to sit in the shop for 16+ years?
That's what clutter does.
It gets in the way of life's simple joys.
I guess that's part of why it feels better once decluttered.
There are many other little simple joys that are being experienced,
not as cool as the cast iron ones of course,
but joys nonetheless. 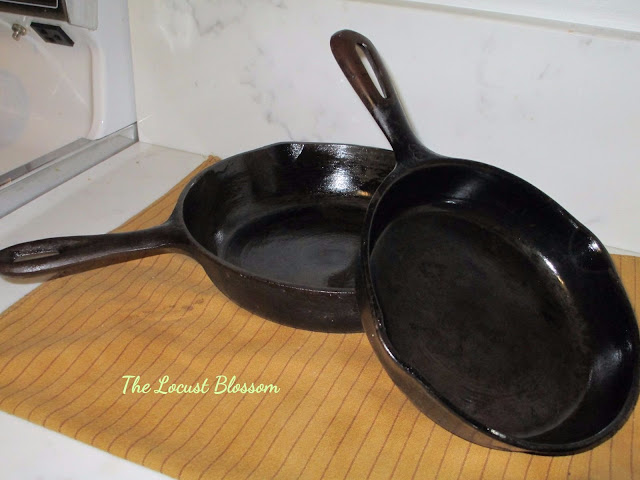 We like so many others are finding our way out of the excess,
and it sure feels good.
Posted by Lady Locust at 7:44 AM 7 comments:

The saying about my mom is that she could stick a pencil in the ground
and it would grow.
Me on the other hand~
As I've said before, I plant and God laughs.
This is the carrot and beet patch. 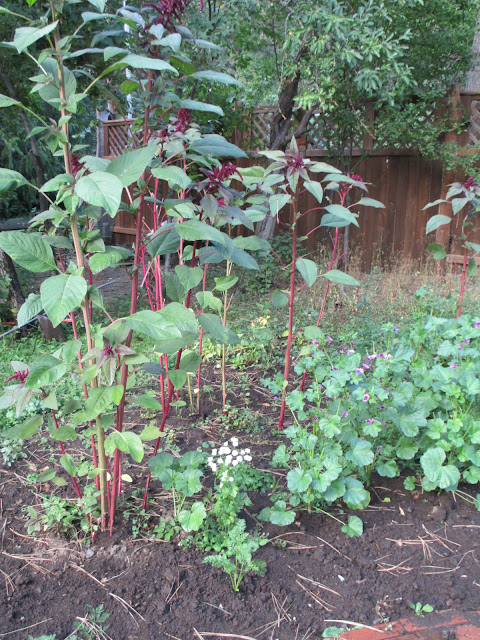 Last year, Mom sent a couple big bags of "composty stuff."
We dumped it in this plot and turned it under thinking nothing more of it.
Fast forward to this spring.
Carrots and beets get planted - though a smidge later than usual.
Before long, there were red stalky clusters of stems all over!
(Amaranth)
Then, sprinkled here and there in their midst were plants with round leaves and purple flowers.
(Dwarf Hollyhocks)
And where one or the other of those wasn't hogging the ground, were those little white button sized daisy looking flowers that I was all too familiar with.
(Feverview)
Mom brought up two pots of them a couple years ago,
and they are now nearly to plague status.
So after a couple wheelbarrows full of pullings,
there is at least a little room of an occasional carrot or beet
to eke up through the earth.
I planted two types of carrots.  One did significantly better than the other.
I will be pulling the rest of the flowers, because I don't want them
seeding here in the garden.
I know it might already be too late.
They really are pretty - just not in the garden plots.
I'll be sending this picture to Mom with a big ol' sarcastic Thanks!
It really is okay and not disrespectful.
We harass her about her jungle preservation skills on a semi regular basis.
Lesson learned, dump "compost" from Mom someplace I want flowers.

It's the weirdest thing. 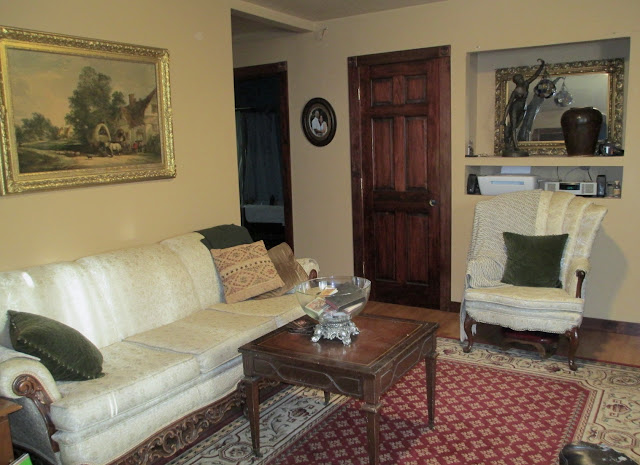 Over the past few years, we've (I've) been on a decluttering mission.
This past weekend, we had hopefully our last ever yard sale.
Well yes, of course it rained.
This time there wasn't as much from the house,
but primarily the shop and yard.
There still seemed to be a revolving pile in the kitchen near the back door,
then that ever growing pile in the shop.
I know, who would need to declutter the yard?
That be us 😁
We had the snow blower, old lawn mower, the old '49 ford, the tent trailer, the chicken tractor, a motorcycle, and canoe
as well as the stuff from the shop and house.
Honestly, we didn't make much which was disappointing.
We still have several of those big items that we will have to put on Craigslist.
I was rather hopeful that it would all be gone Saturday. 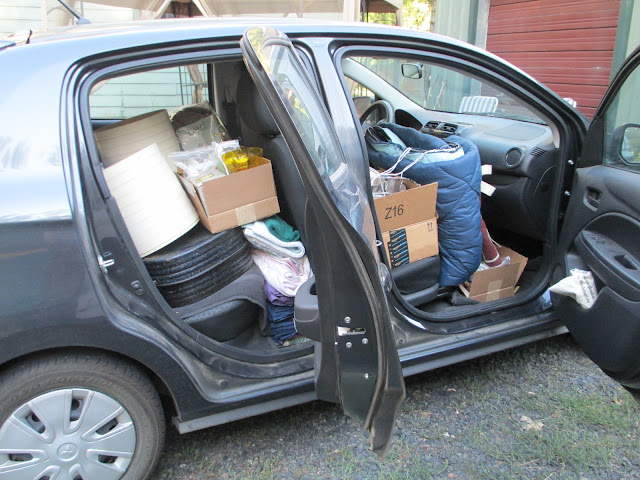 (It will take multiple trips.)

Even though at this moment, our shop looks like a bomb went off,
I have the knowledge that those boxes are empty,
and the plastic bins. . . are empty.
The leftover items are being logged (for taxes) as they go into an empty box,
then loaded and taken to donation.
If there are any boxes left, they can go to recycle.
My mom wants a few plastic bins.
If those remaining are empty, they stack easily.
There is someone who wants to come and look
at the children's books this week.
Many sold and there are still 3 boxes left if that is any indicator of the volume. 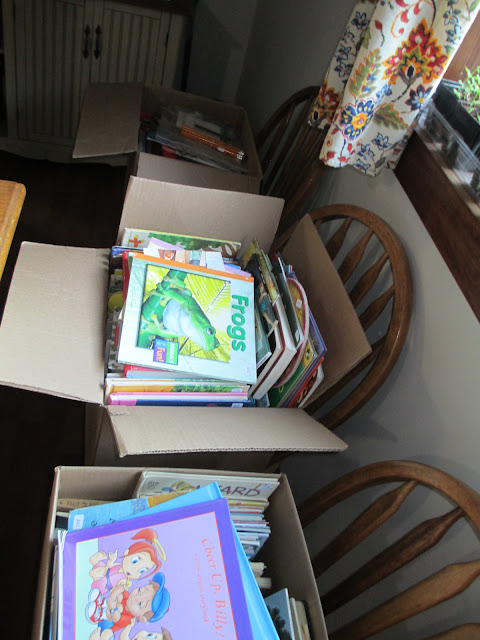 The thing is~
The house looks and feels sooo much cleaner and calmer.
I doubt we'll ever be featured in "Home and Garden," but it's our home,
and it should work for us rather than us working for it.
We are now that much closer.
Even in the shop, there's a more open feeling.
There are empty pockets of space.
Once these left overs are gone and I can park in there again,
it will just be refreshing.
Since moving here nearly 17 years ago, there seems to always be one reason or another keeping us from being able to park in there.
I did get it to the point that I parked in there this winter.
I have just been really surprised at how calming it has been to have gone through e v e r y t h i n g.
There will always be things to go through and keep on top of,
but from here, it seems manageable - more like maintenance mode.
It's not something that happens in a half-hour like on TV.
It has take a few years to actually go through everything.
There are emotional correlations with 'things,' and life doesn't stop
so we can deal with all the clutter.
I still have some papers to sort through but
will wait until I can have a fire going.
I'm sure I'll figure out more that can go,
but for now, I'm going to enjoy this calm feeling.
That's really the best word-
just. . . . calm.

It's the weirdest thing.
Posted by Lady Locust at 6:00 AM 8 comments:

Our wood pile looks pretty much the same as it did a couple weeks ago
with the exception that the odds and ends are now stacked. 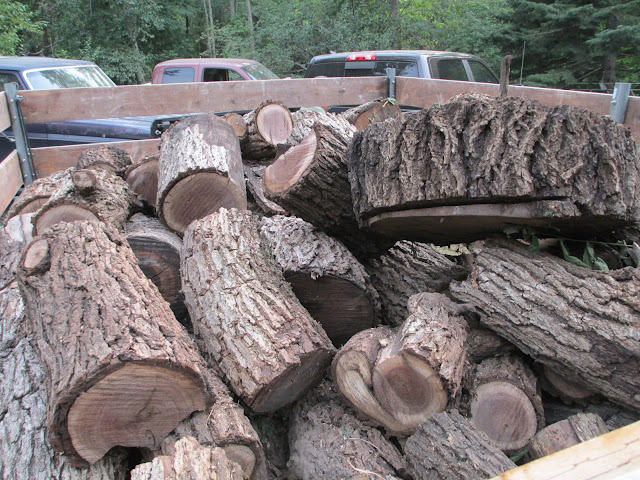 (There were a couple more rounds that were given to a friend.)
Every so often, I like to check Craigslist for this or that.
If I do, I try to remember to look under the "free" category.
It's most often old mattresses, broken furniture, or a year and a half old "puppy" none of which I am interested in.
This time something caught my attention.
Free black walnut.
And it was near Mr. LB's work.
Our forests are closed right now meaning we can't go get wood.
I contacted the fella and hubby and made arrangements.
Mr. LB took the trailer and after work, picked up
probably 2/3-3/4 of a cord of wood.
He wanted a couple pieces for a project, and
the rest will make excellent firewood.
It's still not enough but adds to the stack, and we didn't have to fall it, buck it up, or roll it to the rig however far away.
There were some pieces that needed to be cut smaller, but then only had to be loaded in the back of the trailer that was right there.
We will still need more and would like to get some for my folks too,
but I might continue to watch the list and see what kind of trees
people are falling in their yards.
I told Mr. LB, one could go around taking up all these "free" trees
and here in a couple months sell it.
No paying for wood permits or dealing with the hassles of USFS.

We're still burning the candle at both ends of the day
so this is a shorter post just letting you know what we're up to.
More soon~
Posted by Lady Locust at 6:10 AM 6 comments: