To Everything A Season

There is typically a somewhat predictable flow of seasons.
I don't just mean seasons on a calendar though they play a significant roll in what happens with the other seasons.
So what on earth do I mean by that?
Well, "typically" we are finished up with wood burning season about April,
and we begin wood gathering season.
This year has been a little off.
We still had a fire burning into May.
After our extreme winter which came complete with avalanches,
we were ready for spring.
But we weren't able to go get wood.
They made our road what they termed as "passable" but only to the last occupied house about 3 miles up the road.
Beyond that, the avalanches stayed to thaw as Mother Nature determined.
Mother Nature was apparently in no great hurry. 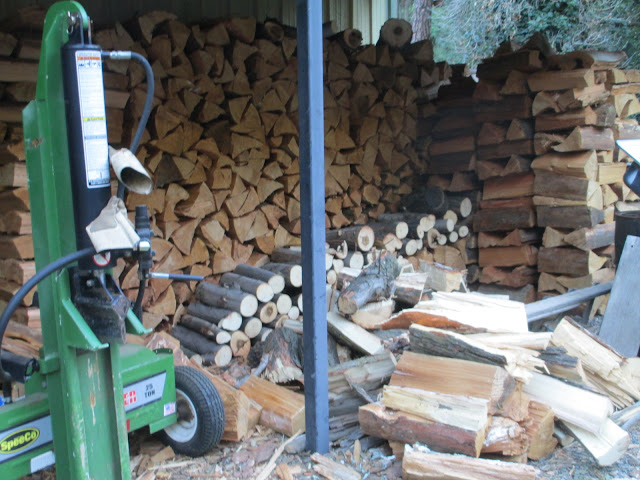 That meant we had to wait to get wood.  We have about 2/3 of what we need.
We are hoping to get another load soon as it is now fire season,
and they could shut down the forests at any given moment.
The other off bit is last year I was canning peas the end of June.
This year they ran about 3 weeks later.
That doesn't sound like a great deal of time, but if you think about the work load and how much you can do in 3 weeks, it might make a little more sense.
We've also had our first picking of green beans
so I've been canning those as well. 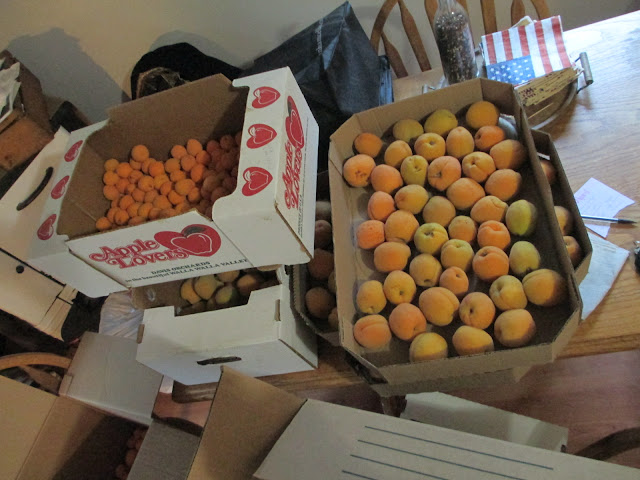 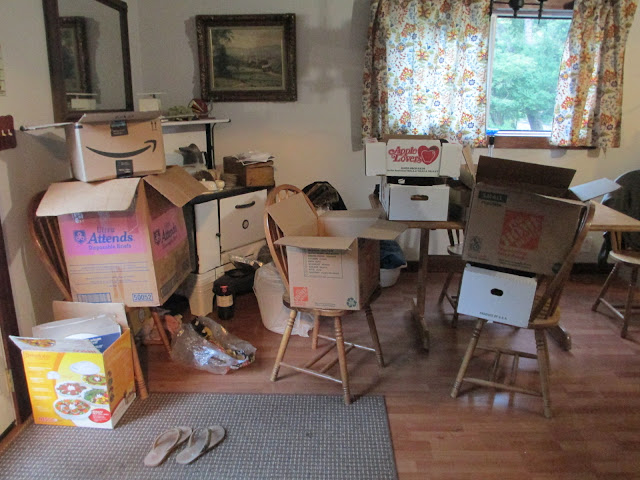 My M-I-L gave me 9 (yep 9!) boxes of apricots.
I luuuuv dried apricots.
This year, I'm storing them in canning jars
so they don't need to go in the freezer. I did have to purchase the jar sealers, but they work pretty quickly,
and are a nifty thing to have and use.
I thought I was on my last round of dehydrators when my mom gave me another box so I'm still at it.
At one point I had 4 dehydrators going to get them all done before they spoiled.

Salmon season didn't really happen this year.
They decided not to open the majority of the rivers in our area
which means no stock pile of fish.
We still have several jars from last year so we'll use those sparingly.

Between Mr. LB and myself, we did draw all six tags, which if we can fill most of them come hunting season will save us quite a bit on beef.
(Tags: bear, deer, elk)
I have yet to get an elk so that's not something to bank on.
I've already heard that we are supposed to have another hard winter. 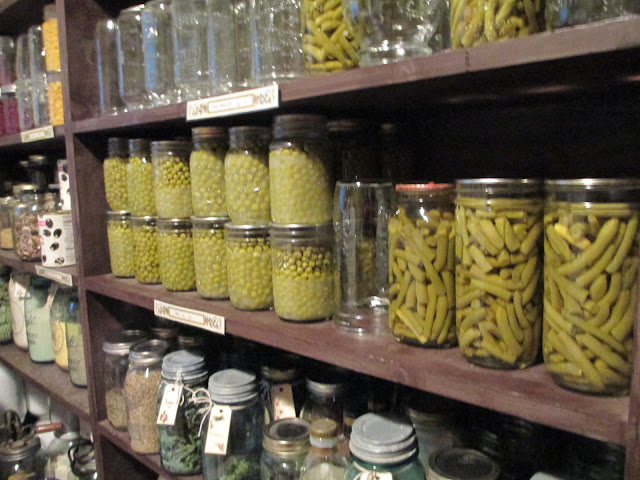 Our seasons seem to be stumbling over each other rather than pacing themselves so slow-pokes like me can keep up. 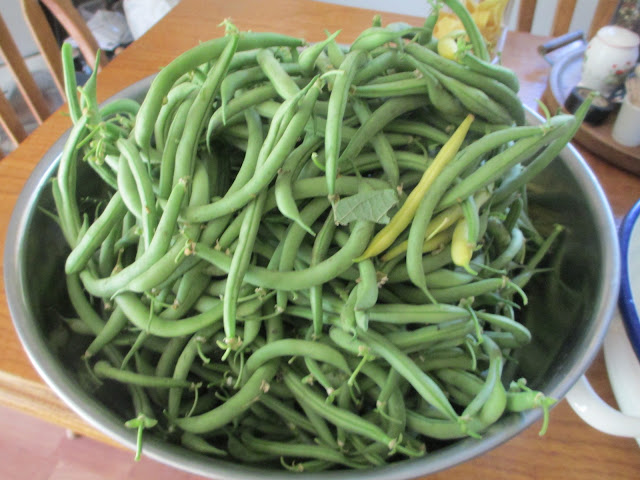 (I like to plant a few wax beans to throw in - adds a bit of a jewel to the jars.)

I now have peas done, we'll be picking another batch of green beans in a day or two, and once again think I am finishing up apricots.
Hopefully, I can get these things finished up then move onto corn
which is already on - early.
We've been running from one end of the day to the other, and our kitchen is a flurry of big bowls, canners, and various implements.
The nice part is that our pantry shelves are beginning
to look a little less anemic and at night, I almost literally fall into bed.
Aside from our seasons tumbling down upon us,
we are well.
And thankful mind you, that we have the provisions, skills, and ability
to do as we are doing.
We don't take that for granted.

Built to Last~ Another Odd Antique

Found this in a little pile destined to be buried.
I nabbed it for no particular reason than as a reminder~
When we can't find what we are after,
we can invent it. 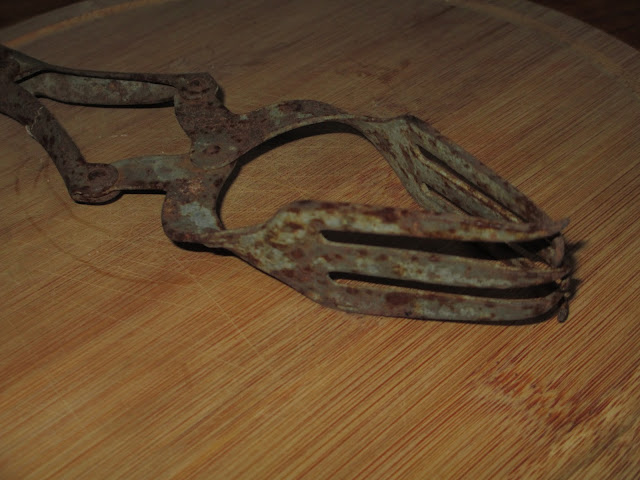 I believe it would be used as a turner like tongs. 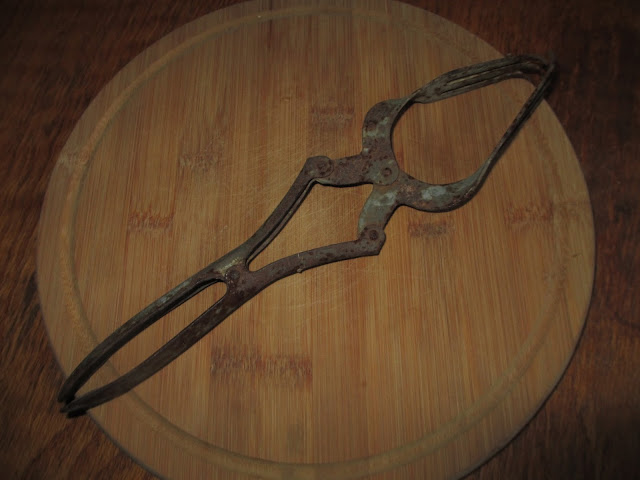 If you know otherwise, please let me know.
I love learning, and it's one more glimpse into the past. 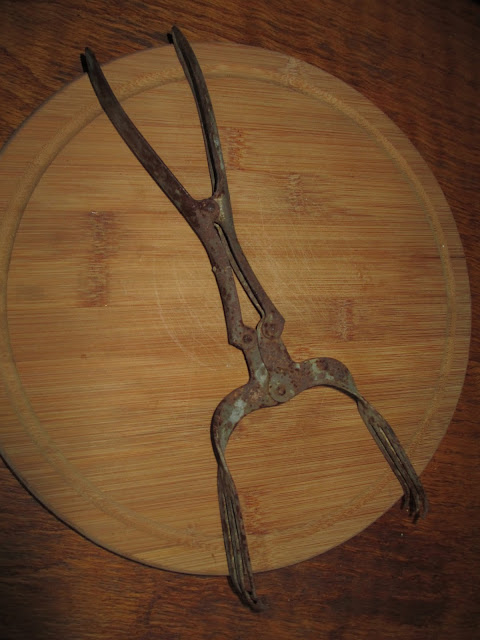 It still functions just as it is supposed to.
I haven't even cleaned it/them up yet.
I'll give them a good scrubbing then a coat of beeswax
and see how they look.

Also, to see other such items,
just type "Built to Last" it the search field.
Posted by Lady Locust at 4:30 AM 11 comments:

A bit of butter a couple years in the makin'. 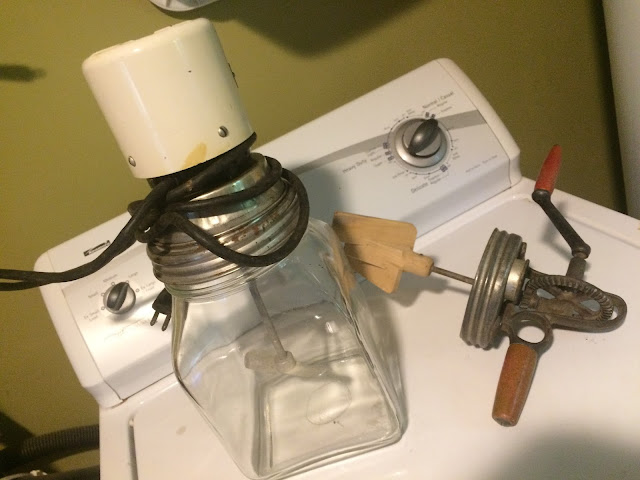 For the past couple years, I've been on the lookout for a butter churn.
I realize they can be purchased new,
but between the price and the uncertainty of quality
I just couldn't bring myself to pay the price.
A couple weeks ago,
I attended a "Love of Junk" event with my mother-in-law.
I found one there, but the gears were wobbly.
They were asking shy of $100 for it.
My MIL asked if they could do any better on the price.
She said she could let it go for $75.
We thanked her and said we would think about it then didn't return.
I would have had to work on it in order to make it work.
Well, God has a peculiar way of making himself seen.
As I was looking for something on Craigslist for Mr.LB,
I thought, "This is silly.  I should look for something on my list too."
I pulled up "butter churn," and there it was ~ better actually.
I replied and gave the seller my phone number, then waited.
The next day I got that call.
I was over the moon excited.
Not only was there an electric butter churn, there was also the hand crank top
which is what I was really after.
It was an older gentleman who was selling them,
and it was right on my way home from work.
(I live in Timbuktu so this is not the norm.)
He said he didn't have the glass for the hand crank one anymore,
but he just threw it in incase someone wanted it.
I stopped by on my way home from work and picked it up.
We didn't really chat much, but in our exchange,
he said, "Oh you want to use it, not just for decoration?"
Oh yea!
Both are in perfect working order.
This morning on my way to work, I will drop off
some homemade butter and buttermilk as a thank you.
I hadn't made butter since I was in high school.
So yesterday, I began with the electric one.

Here's the run down~ 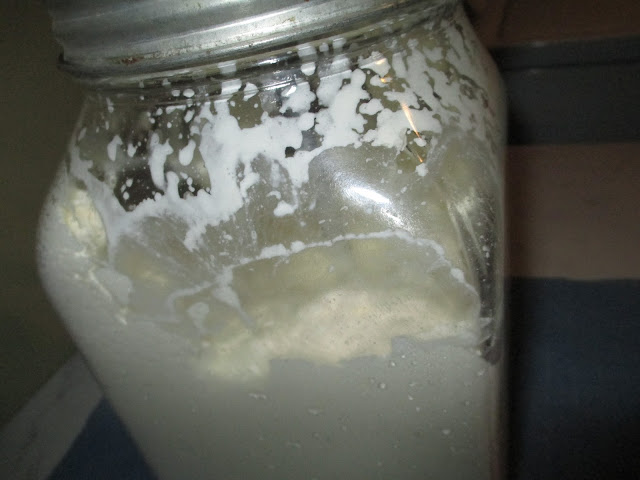 Watch as it turns from cream to whipped cream.
My mom says it's really hard to get it past this stage.
She would eat a whole bowl of homemade whipped cream if she could. 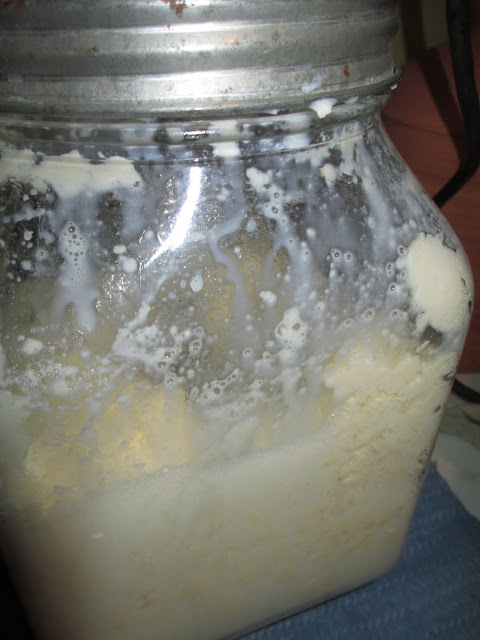 Then after a bit, the fats separate from the liquids.
This part happens relatively quickly. 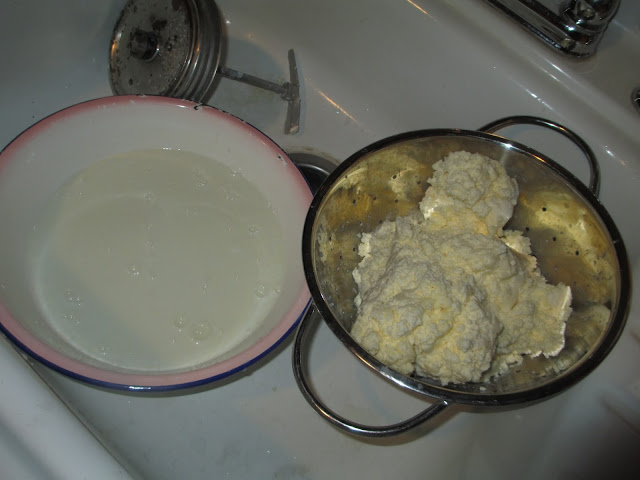 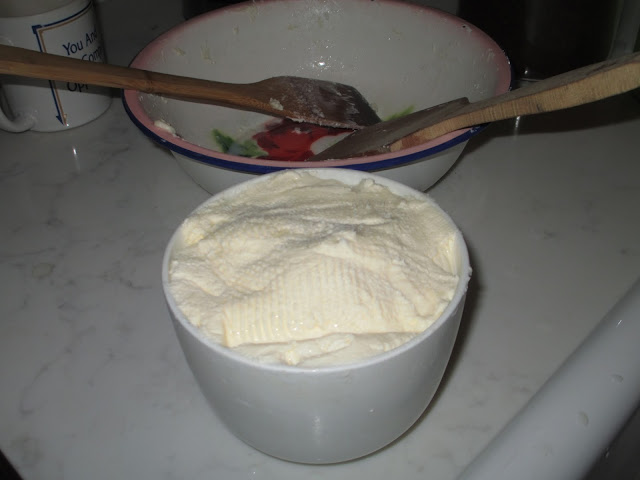 I started out with two quarts of cream and ended up with
about a quart of buttermilk and a quart of butter.
The one thing I had forgotten to do was to leave the cream sitting out
for about an hour prior to churning it.
It will churn faster if closer to room temperature.