So you might have figured out by now that I'm just not normal.

I'm getting more and more okay with that

the more I see what so called normal is. 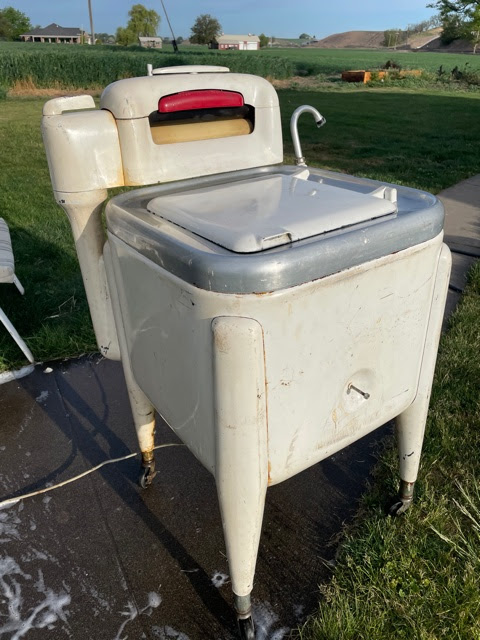 of things I'm continually on the lookout for.

Well this week, I got to mark another thing off the list. 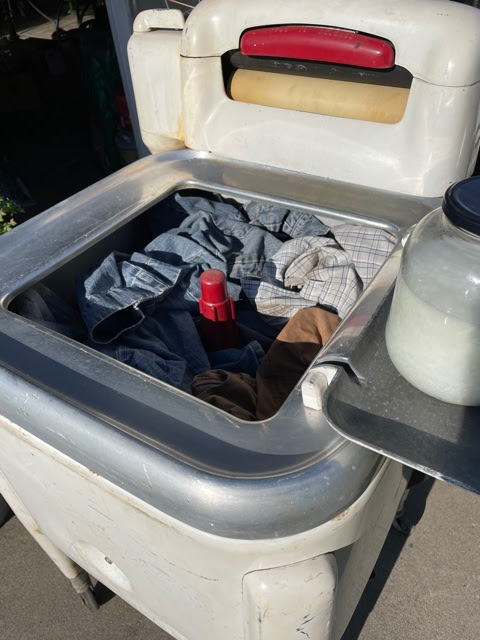 This is about a 1940 model wringer washer that works!

Now I already had a wringer washer, but it didn't have a lid

and the head no longer swiveled.

Since I actually want to use it, not having a lid meant

it wasn't okay to use in the house.

The water would splash all over.

Other than that, it works great, and I have used it a handful of times.

When we moved to the house we are in,

there was a new washer and dryer already in the house

so we intended on leaving our old washer and dryer up the river.

After using the new set a couple of times, we put it in the basement

and brought our old set from the mountain.

and the clothes came out in knots and dirtier looking than when they went in.

The dryer wasn't much better.

I use our old set and will until it dies at which time it will not be replaced.

I seldom use the dryer.

I do use it when crazy happens in life, and I just need to get laundry done,

but that isn't the norm and even in those circumstances, I could hang the clothes

and deal with the inconvenience.

The washer on the other hand, I use regularly (of course).

When the ol' trusty Kenmore dies, I don't want to be stuck

depending on a newer model. 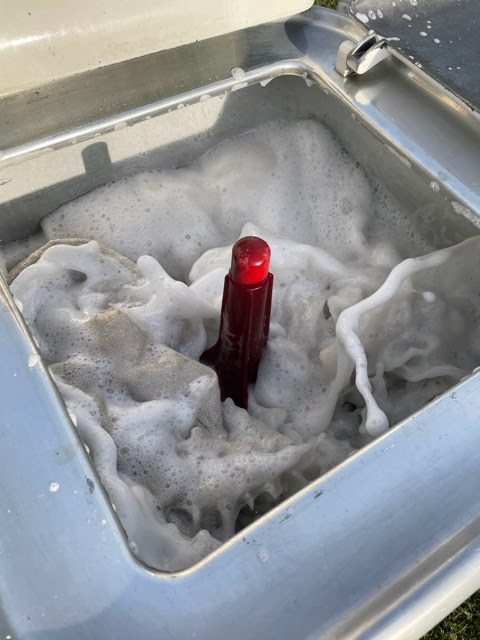 One thing I've strived for over the past however many years

is to replace newer inferior products with old dependable items.

Like I said, I had an old wringer that would work,

but if I had to use it regularly, it would be a little less than ideal.

That's why I was looking for an upgrade. 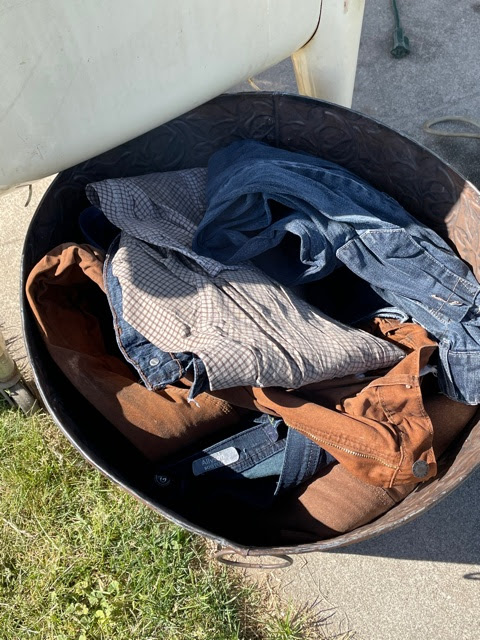 It's sure interesting how things work out sometimes.

have been selling for hundreds of dollars.

I had mentioned to a friend that I was looking for one.

This past week she let me know of one on FB marketplace.

I'm not on FB so it took a little coordinating,

but the end result is a couple days ago, this darling gem came home with me

for a very reasonable price.

It was funny when I went to look at it, the fella had it handy to look at.

It was in a little "town" of a couple hundred people out in the middle of nowhere.

There was an outlet right there, and I asked if I could plug it in.

He looked a little startled and asked, "Are you going to use it?"

I grinned ear to ear and replied, "Yep."

We plugged it in, and it worked fine so we loaded it up and I paid him.

Now whenever our washer gives out, we will be okay.

You'll laugh, but I refer to that as insurance & investment.

This is the kind of insurance I believe in.

I also see it as investing since I should never have to buy another washer.

These are work-horses, they last, and are repairable if they do breakdown.

If only I could find clothes and shoes that would last as long.

We get our work clothes really dirty

so I was curious to see if they would get cleaner with this washer.

They do appear to be cleaner which is great.

as the spin cycle of the Kenmore, but that could be partially

due to operator inefficiency.

It had been a long time since I used a wringer for laundry.

So they did take a little longer to dry, but that wasn't a big deal to me.

Like I said, I will continue to do laundry with our "regular" washer,

but I really like knowing that I have a back up

and that it really wasn't that big of a deal to use it.

I used it outside and don't have it set up in an optimal situation,

but it was only a test run.

If I was going to use it regularly,

The other note is that I did a full load of laundry.

The basin looks so much smaller and is easier to reach

because of the shape, but I fit just as many clothes in it

as in the large capacity Kenmore washer.

I guess other than letting you know I'm a little goofy,

without giving much thought to what goes into it.