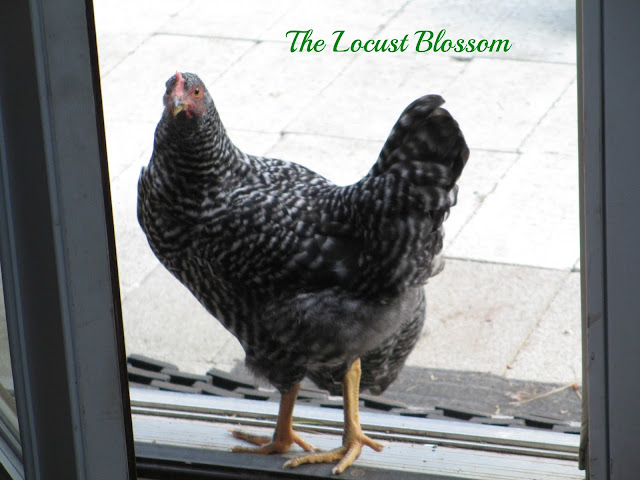 Just as a little side note:
This year I may wait until the beginning of March to get chicks.
As you can see by the past two posts, we've had an exceptional winter and still have a good deal of snow on the ground.
I know in other areas, it's been mild so am sharing this before most folks are getting their chicks (hopefully.)
Posted by Lady Locust at 4:03 AM 7 comments:

Anyone up for an Avalanche?

Oh my, it's been a crazy week!
Monday being a holiday, I didn't have to go to work.
Tuesday morning, we awoke and got ready just like any 'normal' day.
Mr. LB typically leaves about an hour before me.
He left and was right back.
He asked that I contact his boss and let him know that he would be late.
There was an avalanche right at the end of our property.
It's was about 6 ft. so he spent an hour digging through it with a shovel
so that a rig could get through.
We said our morning good-by's for a second time.
By this time it was almost time for me to go so I went out to start the bronco.
I came back in to get my lunch, stoke the fire, make sure lights were off, and all those other little pre-leaving the house for the day tasks,
when in walks Mr. LB with the keys to my rig.
He handed them to me and said, "We're not going anywhere."

The avalanche he dug through was just a little teaser. 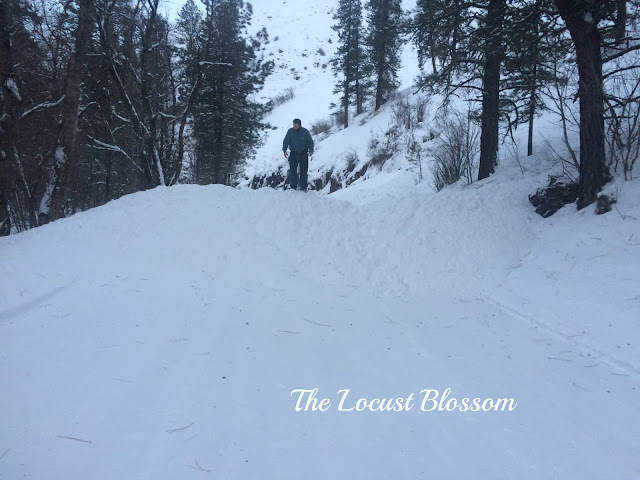 Mr. LB standing on the first one we came to. From on top of the first one looking down the "road."

We called the county road crew
(actually co. sheriff since road crew wasn't awake yet.)
We also called our employers to let them know we wouldn't be in.
Then we went to take a look.
Road crew worked on the roads all day
Many more slid in the time they were up here.
By the end of the day, they had the road "passable."
Then about an hour after they left,
the big-boy slid.
So again on Tuesday, we were stuck.
They broke through it just before noon.
It was at least 14 ft. high.
Just being on the road to get the picture was eery. 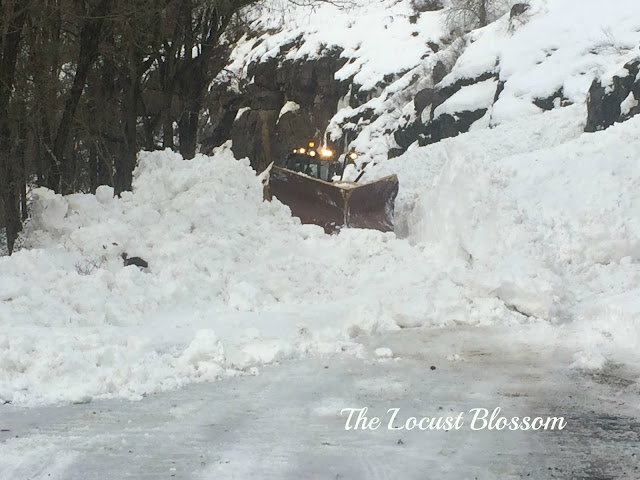 As they were breaking through.
We later discovered there were a couple more the other side of this one.
We just couldn't see them. 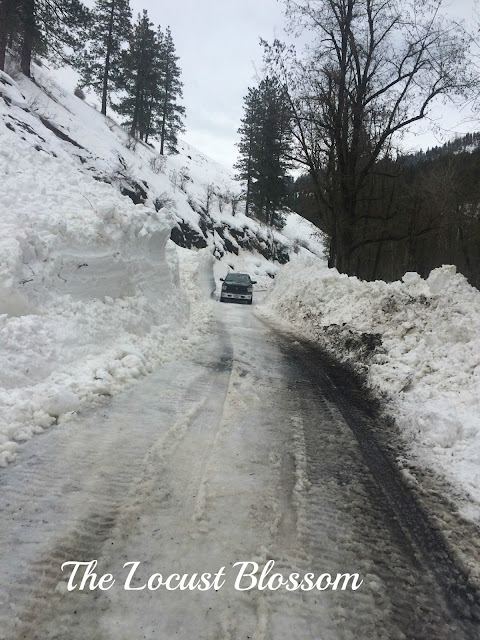 The thing is. . .
other than not being able to go to work, we were just fine.
We manage our home/pantry etc. in such a way
that we had plenty to eat, kept the fire going, and were safe.
(Forgive me, please. "Manage" sounds so formal, but I don't really know another word that encompasses "just the way we live.")

We aren't "preppers" by any means.
But we do live in a more traditional way.
If we were trapped for an extended period of time,
we would eventually have run out of milk and cheese.
Our meals might have become increasingly "boring," but we would still eat.
For us, living where we live, living the way we live is important.
For others, living in other areas, with other possibilities,
perhaps it doesn't make much sense.
But being "trapped" is an odd feeling.
Knowing that as long as we stayed home we would be okay
was an enormous comfort.

On a little side note:
The evening of the larger avalanche was a neighbor's birthday.
They had a party scheduled, but only the half dozen households
above the snow were able to attend.
We said a prayer of thanks for our safety, the enormous amount of food
we had there to eat, and the company of neighbors.
Two days later they spent the entire day on our road.
We now have huge walls of snow on either side of the road,
but we can pass through pretty easily.
Sometimes, the wisest thing to do is simply stay put, eat stew, and be safe.

On A Cold Winter's Day

Oh how poetic that sounds.
Yea Right!
Let's take a looksy outside, shall we.
That be the moon on my way to work. 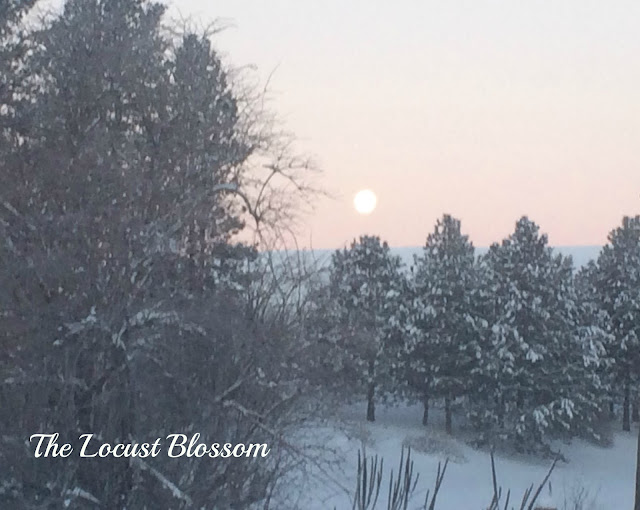 We have barely made it up to double digits for over a week.
Yesterday, Mr. LB borrowed a neighbor's little tractor so we could
do some snow management.
Our poor snow-blower kicked the bucket a couple weeks ago.
We are running out of places to pile the stuff.
If we get a warm spell, there will be severe flooding down river.

In the last post, I showed you this photo.
This is looking out our kitchen window. 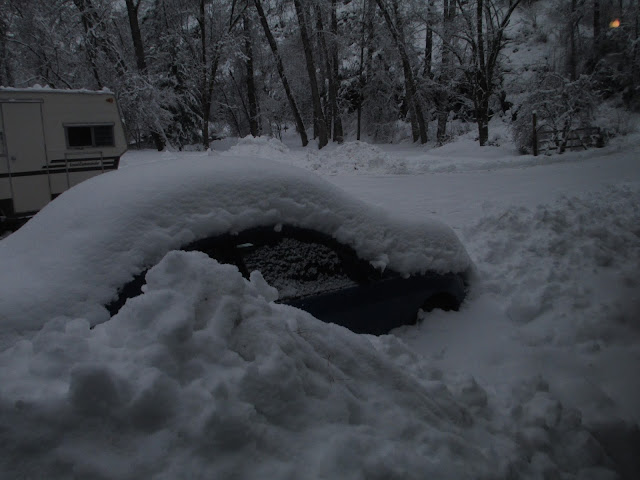 Within the week, this is that same view. 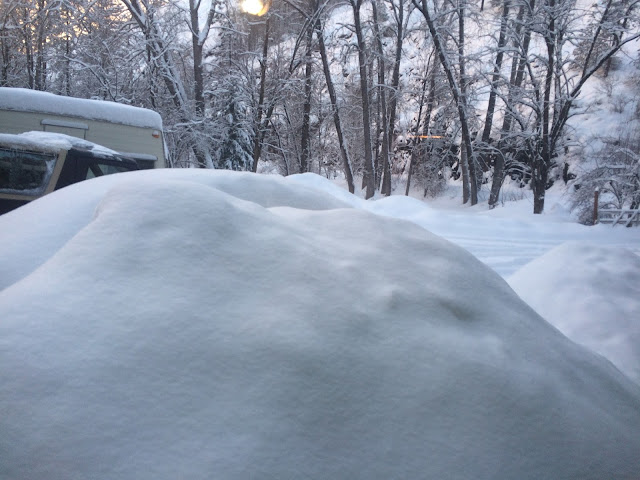 And from the driveway.
Sorry for the headlight interference.  It was snowing and I was leaving for work. 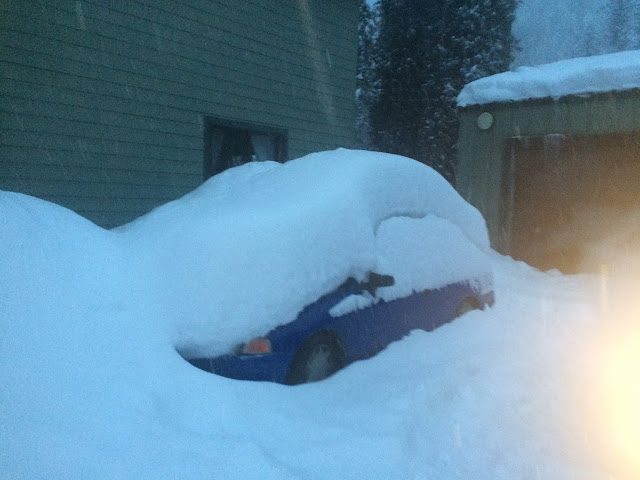 The snow has pushed the elk down.
They are nearly to town!
This is quite a bit lower than where we are. 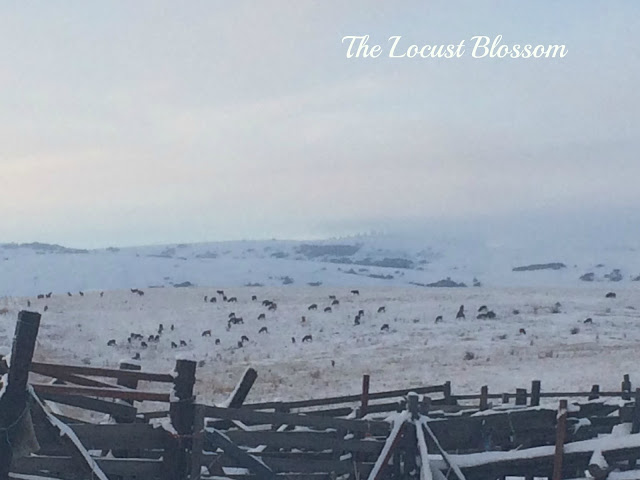 So I just wanted to let you know, I'm still here.
Making it to and from work takes extra time.
Everything is taking extra time.
We just keep shoveling.
I will definitely be welcoming spring.

Until next time,
find yourself a cup of something warm,
and stay in out of the snow. 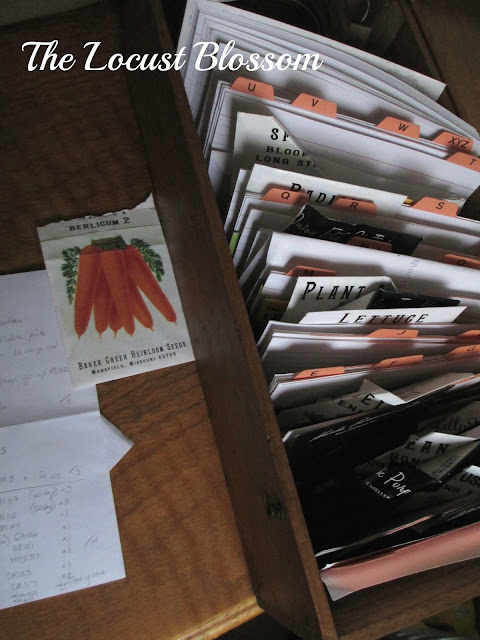 How refreshing.
In so many ways, it is just a continuum of yesterday.
The same snow sits in piles outside.
The calendar page turns once more just as it did last month.
We face the same short days each morning.
But there seems to be something more about January.
For many it's a new year,
a fresh start,
another chance to begin.
We know we don't really need a calendar to be able to do that.
But January offers just a bit of support that so many need.
Maybe it's the rigid cold.
It is upholding and refreshing putting last year behind us.
We can now look forward.
Looking forward of course is a good thing.
We can see spring just around the corner
though it be buried three feet deep with snow.
There is faith and hope.
We know it will be here before long.
In anticipation, we order seeds.
It would be interesting to hear how others go about their seed order.
Do you have a process or just go down the list and click as you go?
Around here, Mom and I order together.
She gave me her order - just for a few flowers.
I had my list of what I want to plant, then went through the catalog
and found appropriate varieties.
We have a relatively short growing season so I watch the days to harvest.
After I have my list, I pull out my seed box.
You can see more about it here.
I then cross the seeds I have off the list.
I have been trying to improve my seed-saving skills.
The more I do this, the fewer seeds I will need to purchase.
After all that, I place my order.
Now I just have to wait ~ first for the seeds to arrive,
then for spring.
January indeed brings hope
and great anticipation for the upcoming growing season. 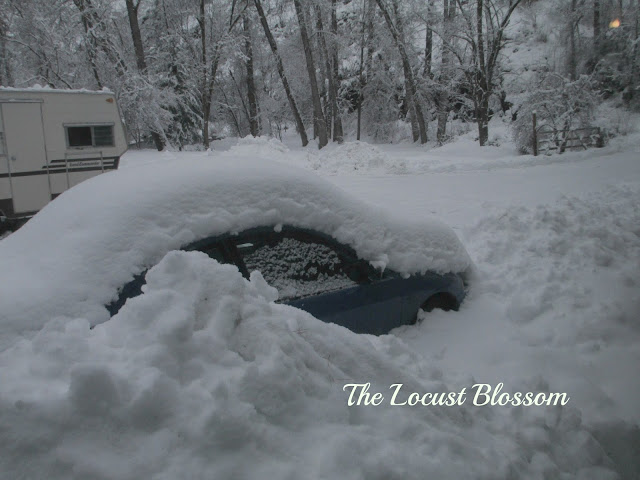 In the mean time, we will just keep shoveling snow.
This picture is from last week - looking out our kitchen window.
We've had more snow since then.
Now we can't even see the car.
This weekend, we will probably hitch up to it and pull it out
since that can't be good for it.

It's January~ Keep Safe and Warm.