You might recall this past spring, we got a couple lambs to raise for butcher.
We wanted them to be grass fed so knew we were in for a chore.
My mom commented how she always enjoyed fattening out critters.
I explained that we weren't graining them so they weren't just kept nice and tidy in one little spot. 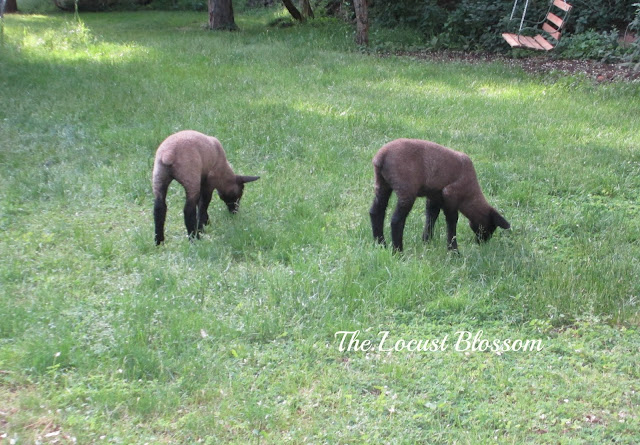 We began saving our grass clippings for haylage before we even got the lambs.  Since sugars are what gets stored as fat (marbling in the meat,) we wanted a natural way for them to have those sugars without grains.
Making the haylage was easy enough.
We put grass clippings of moderate moisture content in a black garbage bag and sat on it to get as much air out as possible.
(Sorry, no pix of that:)
Then we wrapped it in 2 more bags making it triple wrapped.
And yes, it is necessary to triple wrap them.
Then let it sit to ferment for 6-8 weeks.
Doing this does require one to plan ahead.
The lambs started out in a 12 X 12 pen that we shuffled around the yard twice per day.
Once they began eating well, the area of the pen was not enough to feed them.  We began tethering them while we were home.
We used a cork-screw anchor so they would be less likely to get hung up on anything.
We just had to make sure we sank it far enough away from anything they weren't supposed to eat.
At night we put them up in their pen which we had expanded.
We tied the dog near them at night for protection -
or at least as an alarm system since we have bear, mountain lions, wolves, etc. in our neck of the woods.
They got loose only twice:
once during our ice-cream social (they wanted to join the party) and
once when we were gone and they proceeded to completely destroy our garden.
By the last month, they were eating the haylage heartily and enjoyed our abundance of apples as well (more natural sugars.)
When it was nearing time to butcher, Mr. LB began asking me if I was going to  miss them (nope,) asking if I would be okay when we butchered (yep,) if I would be able to eat them (double yep,) etc.
I finally asked him if he was just trying to make me feel bad.
He said I just didn't scratch them under their chins enough.
I asked him if he would be okay.  He assured me he would be.
(He's a big softy, but don't tell him I told you;)
My folks came up to help butcher.
Mom picked plums for making jelly.  I got hanging bags, vinegar water, and towels, etc. ready.  I also set up the wringer washer out in the yard.
I kept the fleeces to tan, but first ran each one through a couple of rinses to clean them and to cool them faster.
I then spread them on a tarp, salted and rolled each one.
Those are now in the freezer awaiting further processing.
Dad and Mr. LB got their part done, cleaned, and bagged.
Then, later that week, we began cutting and wrapping.
The great thing about doing our own cutting and wrapping is that we can be picky and package it according to how we will be cooking it rather than how it fits in a box.
The remaining bones and scraps went to the dog and the chickens (chickens are meat-eaters too) so there was very little overall waste.

Conclusions
(both good and bad)

Haylage: This is fabulous though does require planning ahead.  The only change I would make is to do it in large zip-locks then in the 2 extra bags.  Once the large bags were opened, it only took a couple days to begin to mold.  Feeding only 2 lambs, a large part of each bag was wasted (well composted.)

Yard: We did not mow this summer.  The lambs fed.  They do not mow evenly so overall appearance of the place was sub-par.  We have an acre and they ate it all!  So figure about 1/2 acre per lamb.  (They also ate garden, flowers in pots, any landscaping they could get to. . . )

Time: This was time consuming!  We moved them at least twice per day.  We did not take any vacations together.  We made sure one of us was home.  Though they tethered well, they weren't really "leash trained" so moving them could be a challenge.  Each move involved re-sinking the anchor and toting their water bucket.

Meat: We have 2 grass fed lambs in the freezer (minus one tasty leg o' lamb) for relatively little monetary cost per pound.  I am one of those who likes having the peace of mind that if something happens, we can still eat, so it's a bonus in that department.

Fleeces: We will also have two lamb skin "rugs" whenever I get around to pelting them.  They will be a lot! of work so hope they turn out nicely.

Do it Again?: Probably not next summer.  We have the trailer restored so will be taking a couple trips and wouldn't dream of asking someone else to take on such a chore.  After that, we'll see.