The latest stitch has been nothing snuggly or pretty.
It's actually been something very useful. 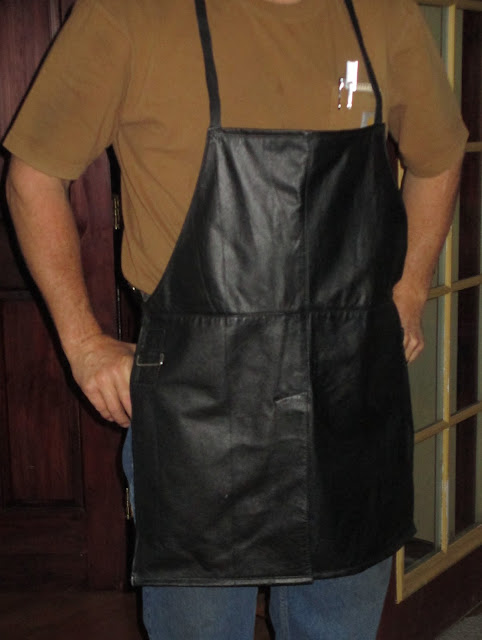 Mr. LB is a metal fabricator,
and in addition to using his great math skills,
he spends plenty of time behind a torch.
Of course sparks fly,
and it's not uncommon for him to come home with holes
burnt out of his clothes.
We try to find his work clothes at thrift stores,
but it can still be discouraging when he has a nice pair of work jeans
and burns them up the first day he wears them.
When thrifting, finding his size doesn't always happen.
Shirts are a little easier to find,
but the wear on his clothes far exceeds most normal people. 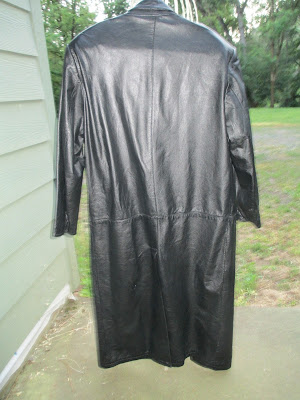 Here's where teamwork comes in handy.
I happen to know how to stitch.
While on the look out for more jeans,
I found a leather coat.
I bought the coat and proceeded to make an apron for him.
The apron was actually his idea,
and I kinda just ran with it.
For the body of the apron, I used the back of the coat.
Then from the remainder made the straps, etc.

It has a rectangle clip for his tape-measure
and is low enough in front that he can still get to his pen & soapstone.
After wearing it for one day,
he said he wanted it to have a belt sewn in.
He initially didn't want one, because he wanted it to be easy
to get on and off.
He found that it falls forward without a belt,
especially if his tape-measure is hanging on it.
The picture was taken before the belt was added.
So far so good.
Now, we'll just have to see how long it wears.

I have an old solid machine that I used for this project.
If your sewing machine is new and/or has a nice fine stitch
that you don't want to ruin, I would
think twice about sewing leather with it.

Until next time,
Nimble Fingers and Even Stitches
Posted by Lady Locust at 6:53 PM