The Messy Truth about Canning Corn

It is always amazing how you see pictures online
like this. . . 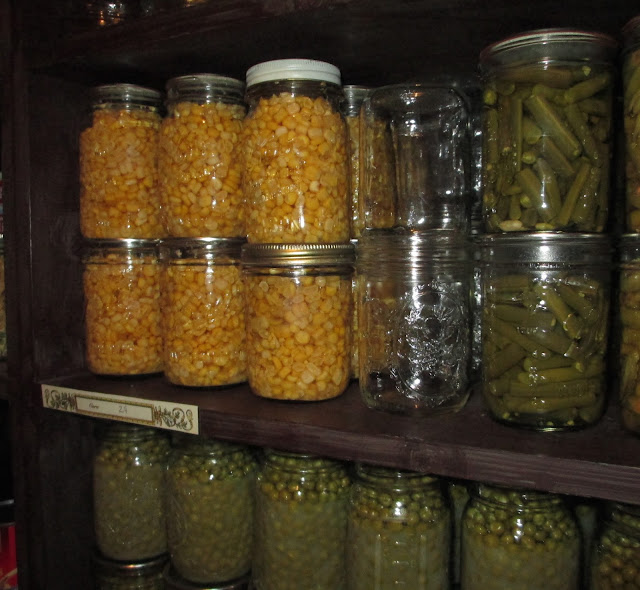 just the end result of the day's labor
without seeing all that goes into it.
Many folks prefer to freeze corn, which I admit tastes pretty darned good.
Freezer space will become precious to us here within the next couple months.
So, we prefer to have it canned.
It still has the delicious flavor of 'real corn'
not like the tin-can flavor of what is bought in the store.
This was our first batch of the year.
Mr. LB must have thought I would be bored - hardy ha ha.
He brought home 42 ears 'for me.'
We ended up eating 2 off the cob and 2 were rotten
so from 38 ears, we yielded 19 pints which may not sound like much
unless you are the one to do it.
Here's how it went.

Have jars and lids out and ready.
You'll need a pint jar for every two ears (or quart for 4 ears.)
I like to get everything I'll need out before I start,
so you might read through completely then gather items before beginning. 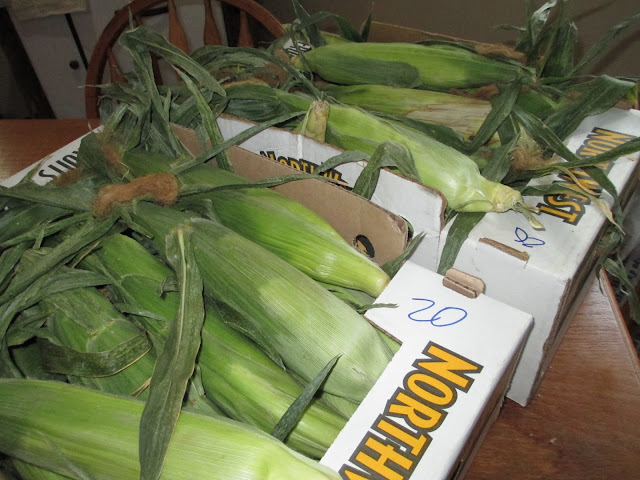 First set up for huskin' the corn. 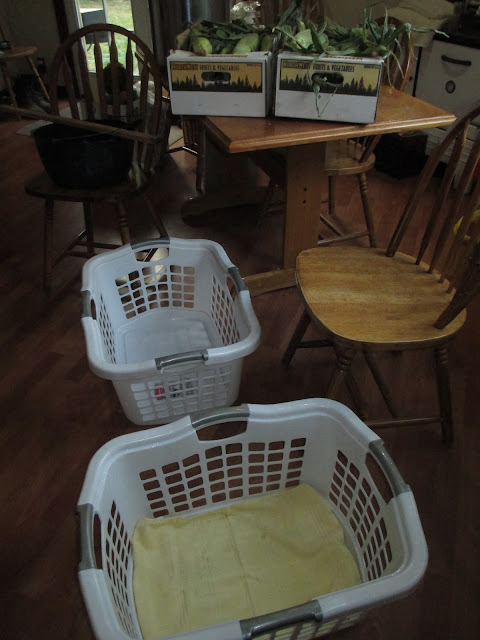 Never mind the junk in the background.  I'll fill you in on that soon.
One basket for husks and one for corn. 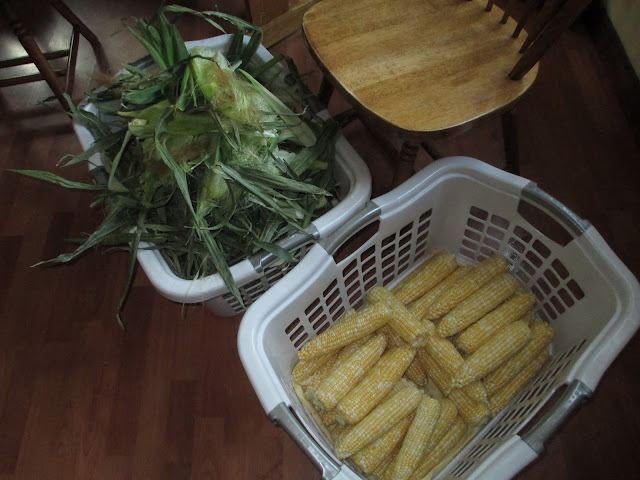 Before you clean your corn, put a large pot about half full of water on to boil.
Proceed to clean the corn.
If you can do this outside, fabulous.
An outdoor kitchen is on our someday list, but for now it's in the kitchen. 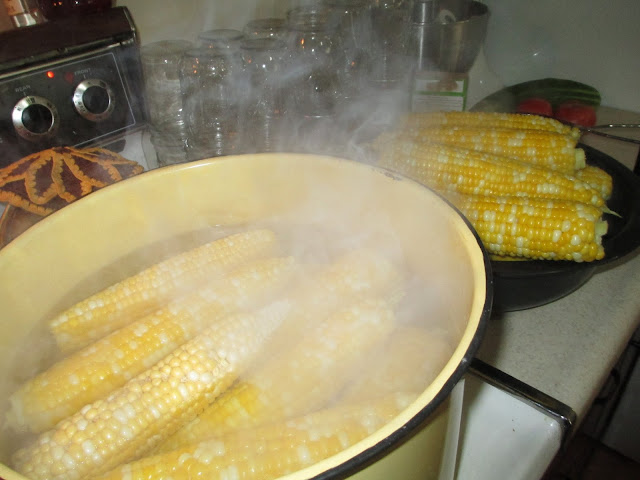 Once the corn is cleaned and the water is boiling,
blanch the corn for 3 min.
This is to boil it for 3 min. then remove it.
I did this in batches since it wouldn't all fit in the pot at the same time,
and I was doing it alone
so I wouldn't have been able to keep up with 2 pots going.
Once one batch is out of the water,
I put the next in and take the hot corn over to the table where I have
my little de-cobbing set up. 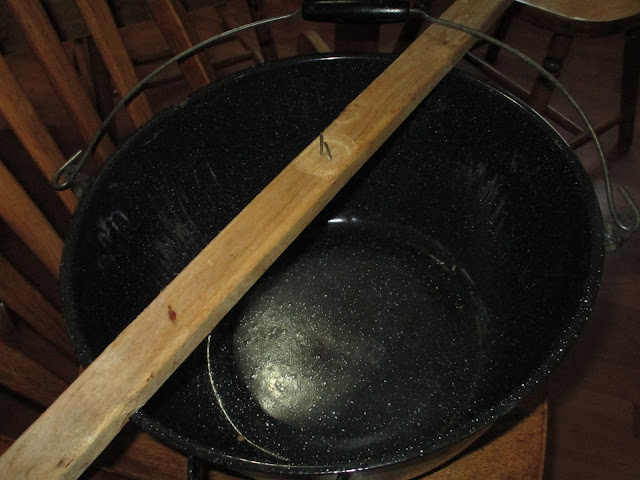 I have a 1"X2" about 3 feet long with 2 nails stuck in it.
I just call this my corn stick and you can probably tell,
I've used it for a few years now.
If at some point, it wears out, it is easy enough to make another.
I set this over a large cauldron or bowl.
I am vertically challenged so I set it on a chair rather than the table.
Here's where it really starts getting messy. 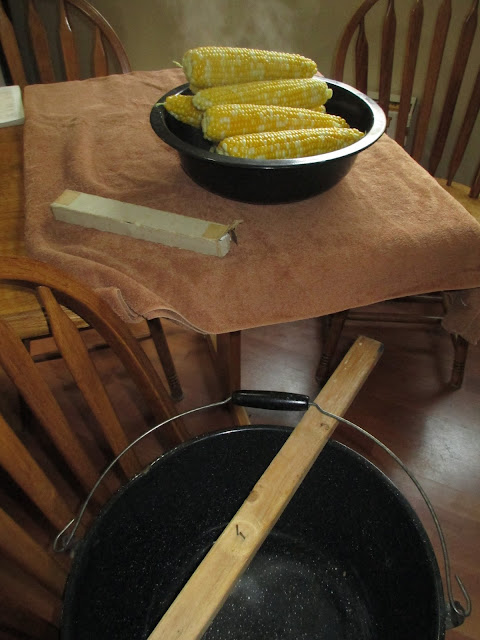 I have an old towel over the table just because
I'm setting a bowl of hot corn on it.
Using a nifty little tool available in most marts,
I remove the corn from the cob.
It's so much easier than using a knife. 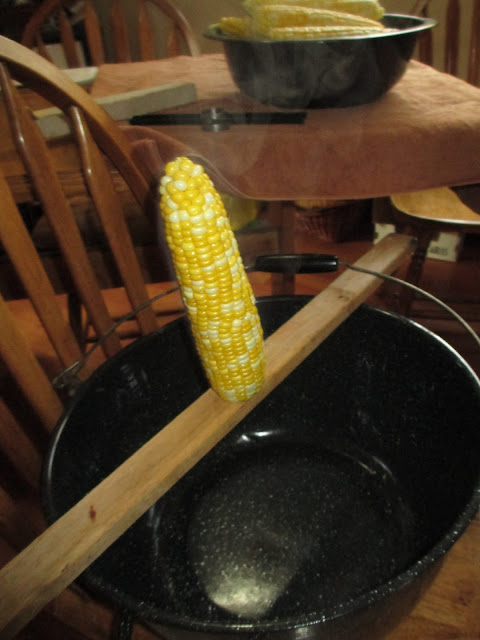 It does take both hands.
Just start at the top and slightly turn as you press down. 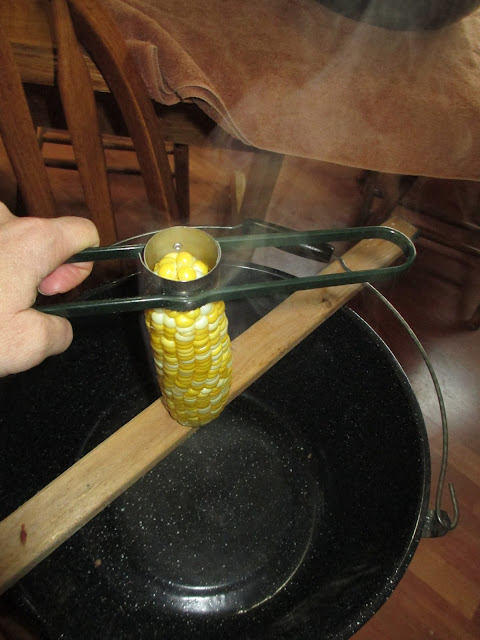 I keep the basket of husks handy so I can just throw
the cobs in there. 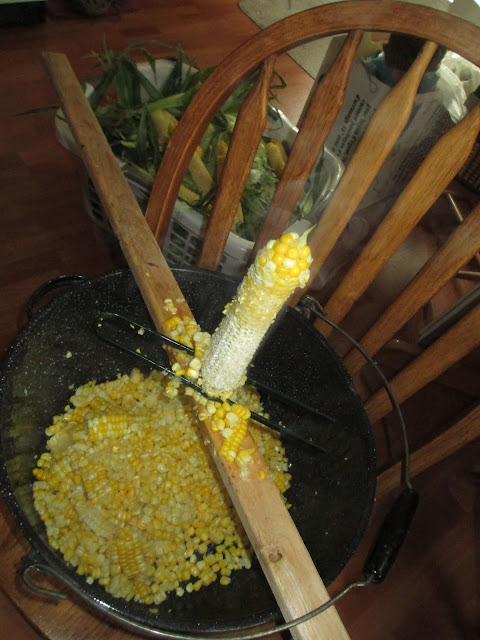 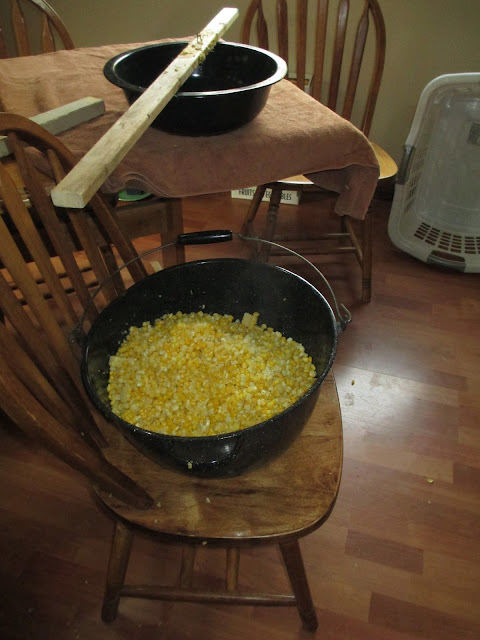 We end up with a bunch of corn and a floor that looks like this . . . 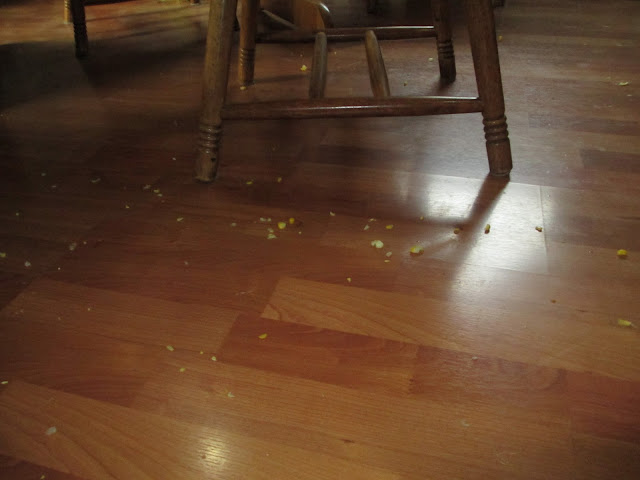 I wasn't trying for this or being careless.
Some of those little kernels are just rebels and go flying.
The corn milk also squirts here and there.
We'll come back to this, but for now there is corn to can. 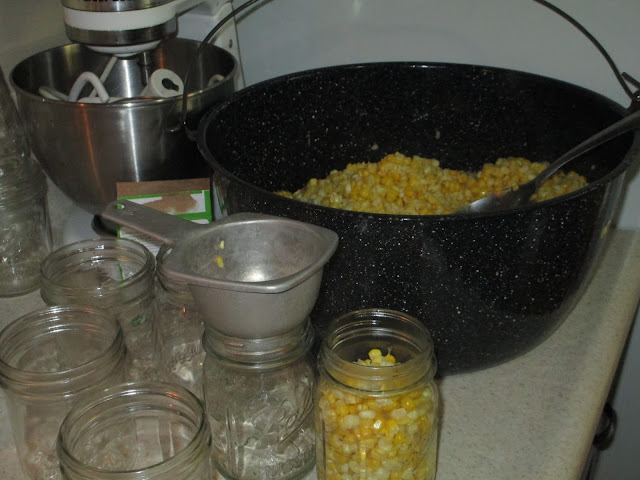 Fill jars up to about 1 inch below rim. 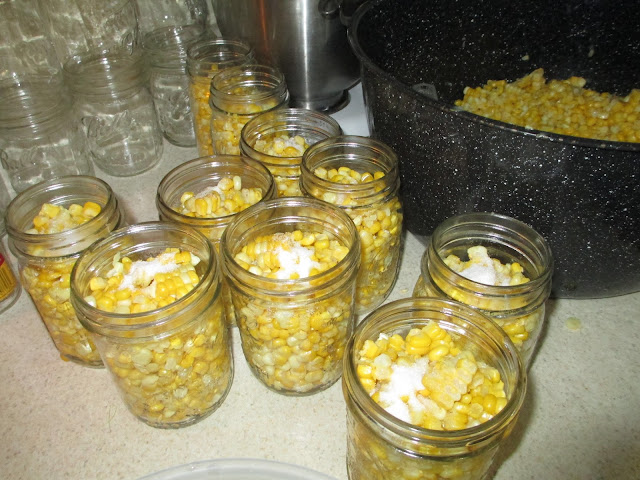 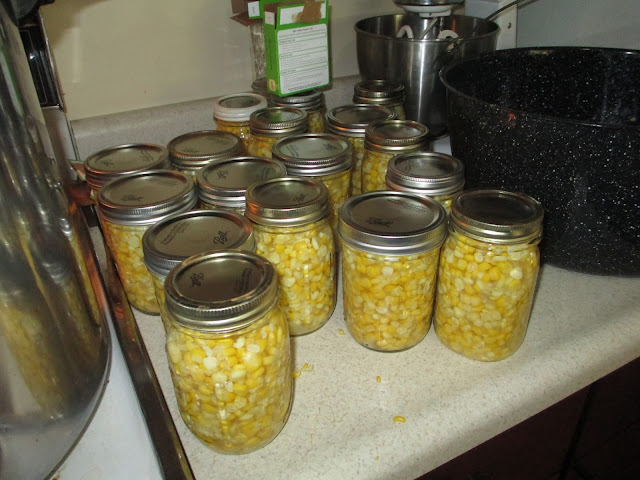 Add very hot water up to 1 inch below rim and seal with lid and rim.
Follow directions for your pressure canner, but mine is to process for 55 min.
This gives me plenty of time to wash up the caldron, bowls, tools, chair,
and even mop the floor.
After processing, removing the jars from the pressure canner,
and letting them cool on the counter, they can go on the shelf.
And now we've come full circle to the picture usually shown~
the pretty jars of food resting nicely on a pantry shelf
awaiting the perfect meal.

It may seem like a bit of work, but Mr. LB is probably sick of hearing
how much better this taste than store bought:)
In other words: it's so worth it.

Until next time
Nimble Fingers and Even Stitches