Oh, I can hardly wait to share with you.
This past weekend, we attended
Flora Pioneer School Day. 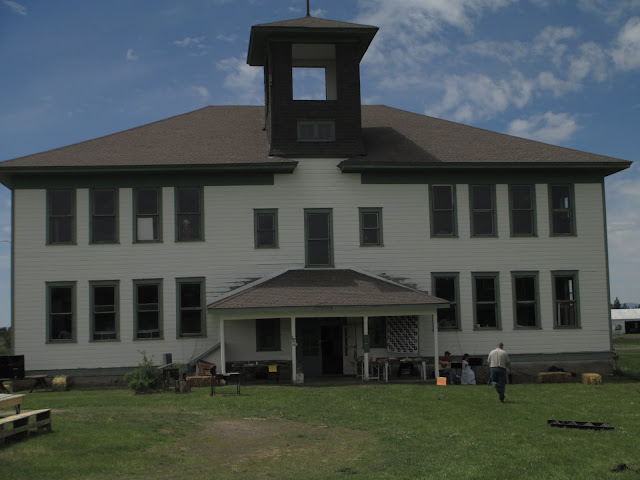 Flora School
It is a fund-raising day to help maintain and restore the old Flora school.
Flora is a ghost town in the upper north-west corner of Oregon.
You can read more about the history here.
(They are having trouble with the site, but it has other resources and the history and other tabs are all still in good order.)
The first order of business in restoring it was to get a new roof on it
which they did. 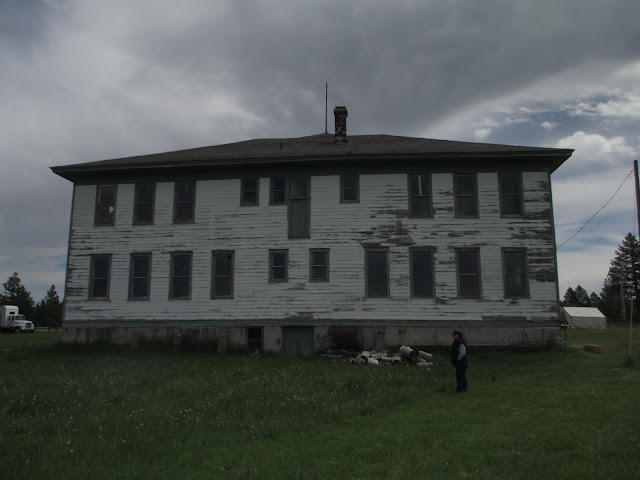 Back of the school.

You already know I'm trying not to spend money.
This weekend, we did spend a little money; however,
I told Mr. LB, "It makes you feel good to spend the money."
It's a wonderful feeling of giving and supporting something good.
Keeping bits of the past alive and well preserved is important.
I'll just start showing the pictures,
because there are quite a few. 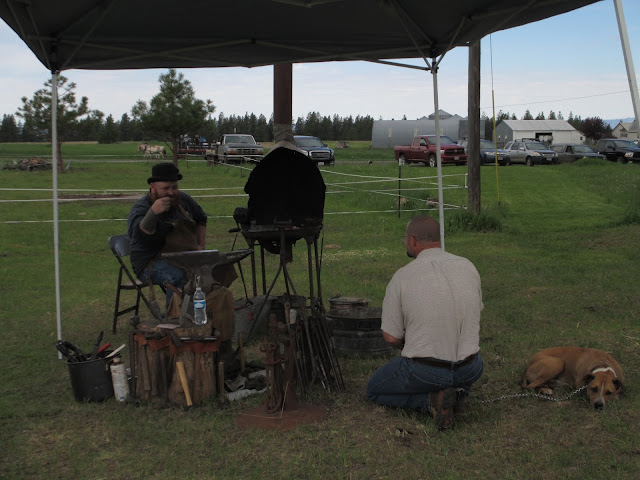 Mr. LB found the blacksmith directly.
Rip already knows it will be a lengthy conversation so decided to nap.
By the end of the day, he made this steak turner. 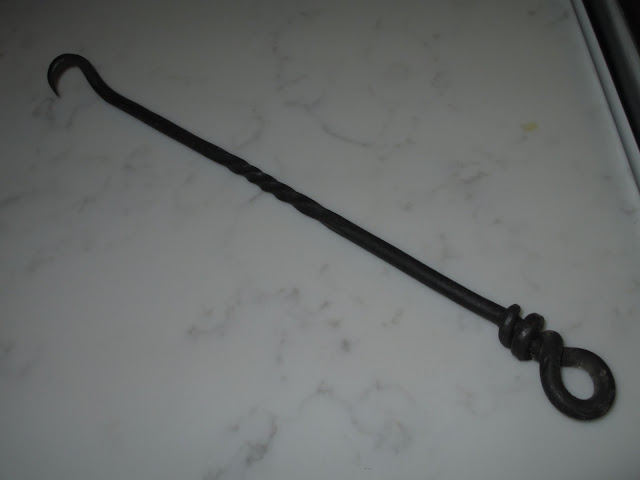 If you are interested in the blacksmith, he can be found on Facebook at
Rusty Hammer Forge 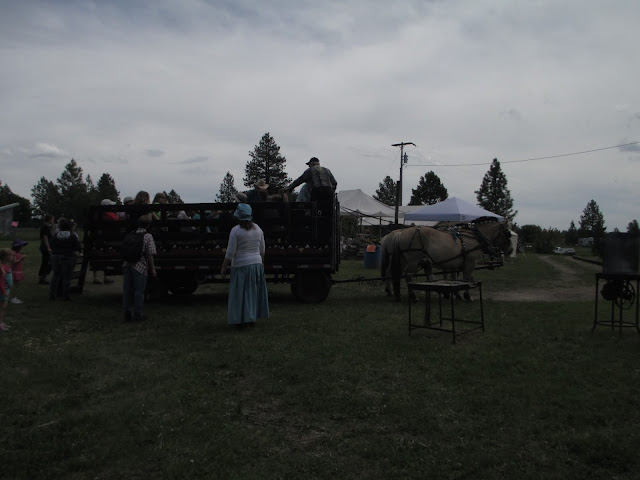 There were wagon tours of the town.
The person who actually did the speaking for the tour
was the last student of the school. 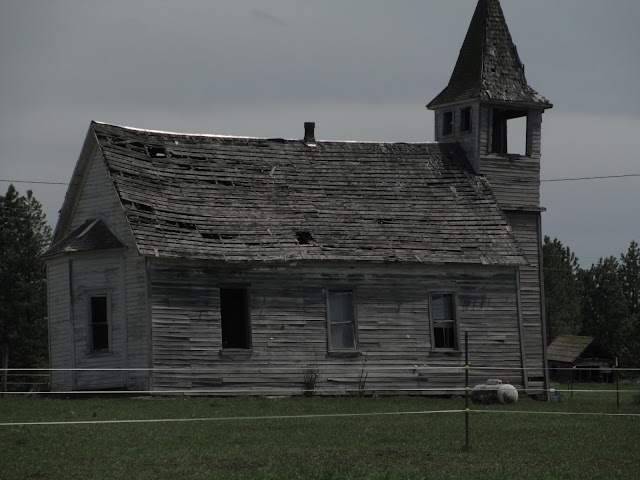 The old church was just across from the school.
It's unfortunate there wasn't an effort to preserve it as well. 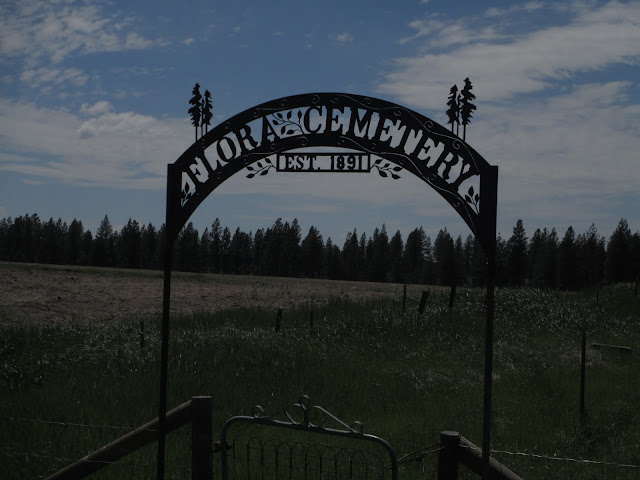 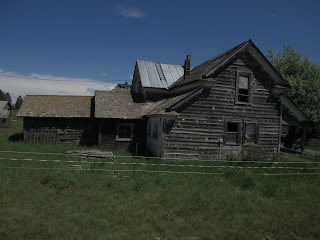 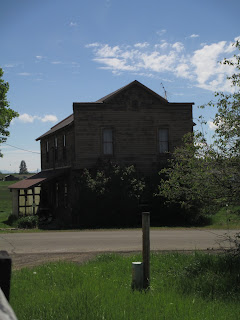 Back inside the school~
In one room there was a country store. 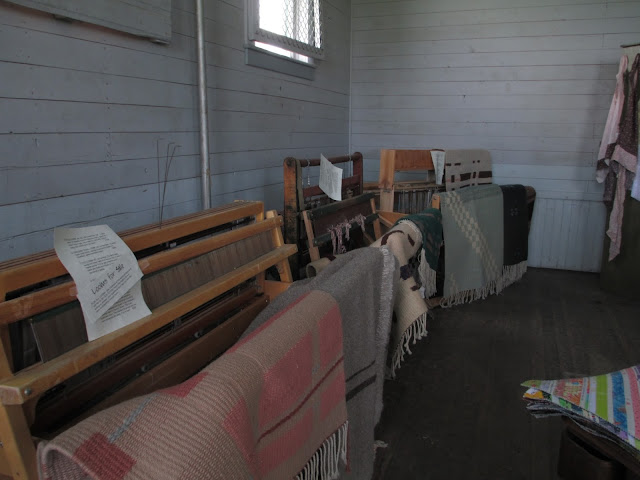 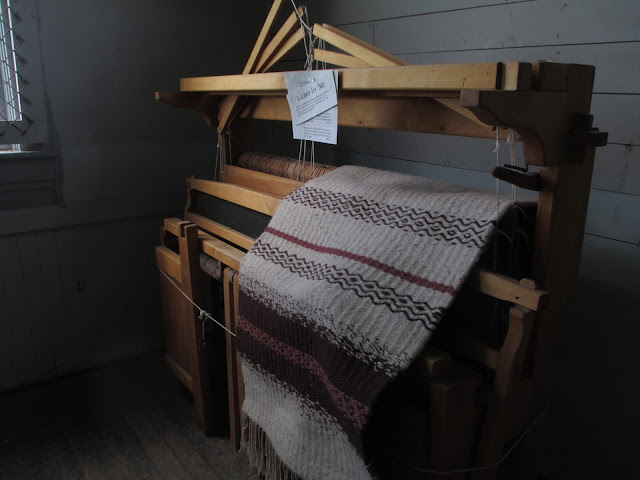 There were 4 or 5 looms for sale (amongst other smaller items.)
I did get the contact information for these.
If anybody is interested, just leave a comment, and I can respond via email.
This room was also the gym even though it was the size of a regular classroom.
The baskets were about 3 ft. from the ceiling.
You can see in the pictures, there is fencing over the windows for protection. 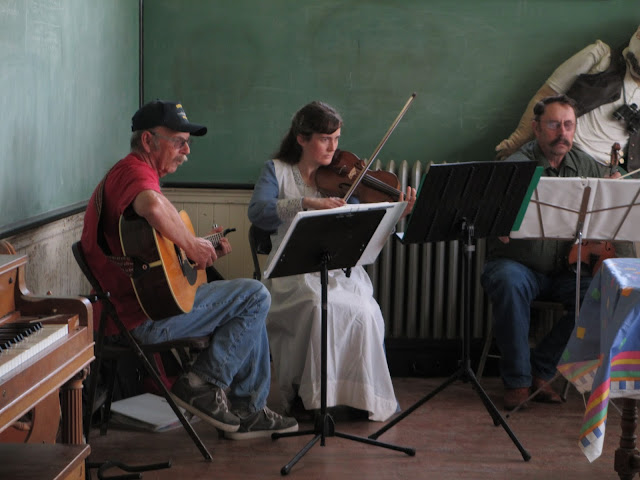 There was music.
They did a great job and played all day!
(with a bit of a break for lunch.)
This room was set up for pie and ice cream.
Oh yea, lunch!
Here, let me show you. 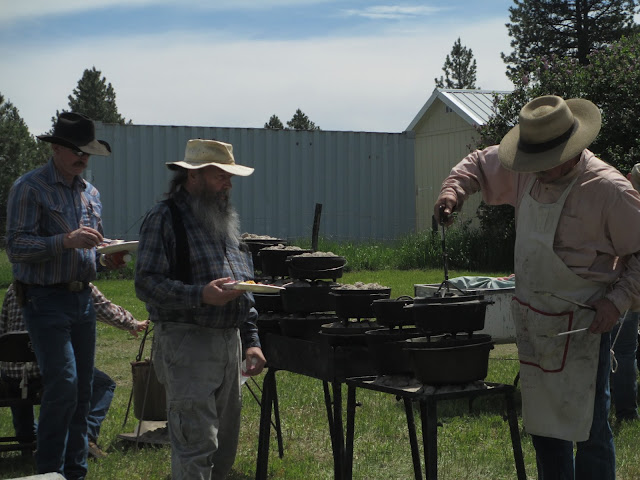 There was dutch oven chicken (1/4 of a chicken!)
That huge pot on the tripod is full of some of the best beans I've ever eaten.
There was also slaw, cornbread made with the corn and wheat that was ground about 20 ft. away by whoever wanted to give it a go, and fresh butter churned at the table right next to it.
It was such a beautiful day,
after lunch the musicians moved outside. 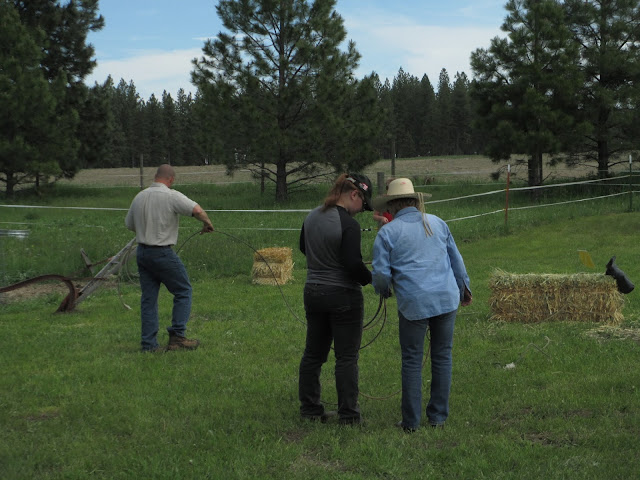 There was roping.
You can just barely see a red t-shirt behind the two gals.
The gal in the hat leaned over right as I took the picture.
Buuuut, it was so sweet.
There was a young fella 9-10 years old holding the rope by the hondo
trying to figure it out.
The fella who had been manning that station was over visiting with the farrier.
I held the dog and told Mr. LB he should go help him out.
He showed him how to hold the rope, then swing and throw.
That young fella practiced for about and hour - hour and a half.
He was "getting it" and was roping the dummy steer.
It was so good to see.
He really wanted to learn and stuck with it.
Speaking of that.
There were quite a few kids there, and I was sooo impressed.
They were all polite, well behaved and just pleasant.
There were no "brats."
Sorry, it's usually the parents who teach them, but some are pretty bratty.
Except here - it was such a refreshing realization later in the day. 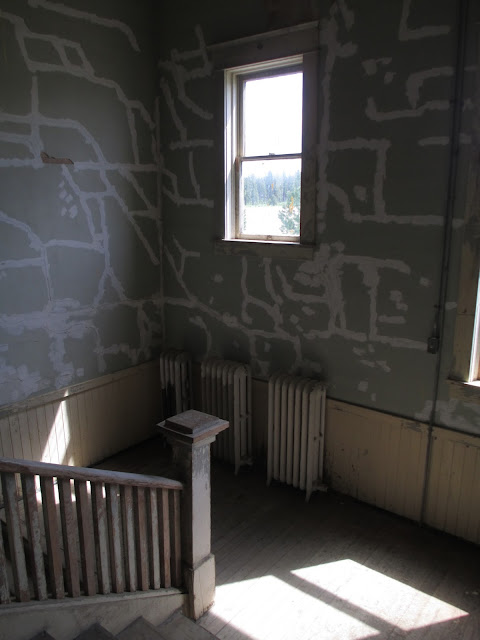 Then of course after I loaded the pictures on the computer,
I figured out all the things I didn't get a picture of.
There was candle dipping, wheat grinding, butter churning,
wooden block stamping, beading, quilting, a cobbler, a couple of heritage piglets for the kids to see/pet, a quilt raffle, the farrier, and
I'm probably forgetting something, but you get the idea.
I also neglected to take a picture of the auditorium or entry.
In the library, they are working on a library for the community.
It was all so nostalgic.
We took Mrs. Calabash and camped at Troy.
If Flora is at the edge of the earth, Troy fell off and is dangling by a river.
Just out of Flora we saw these beauties. 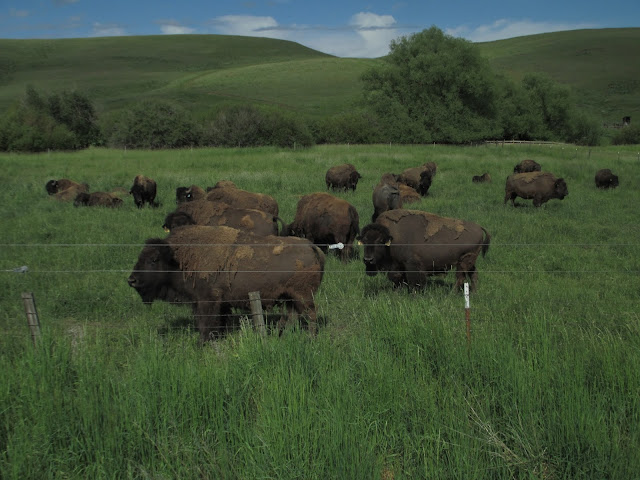 Sometime back I showed you this barn quilt.
Well, we were in the same corner of the state,
and this time found a couple more. 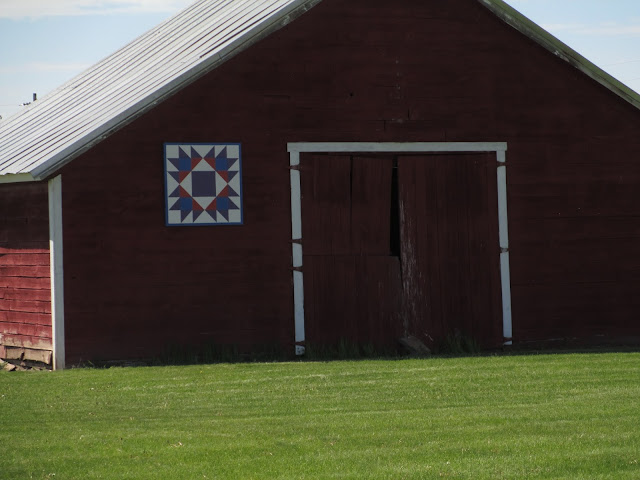 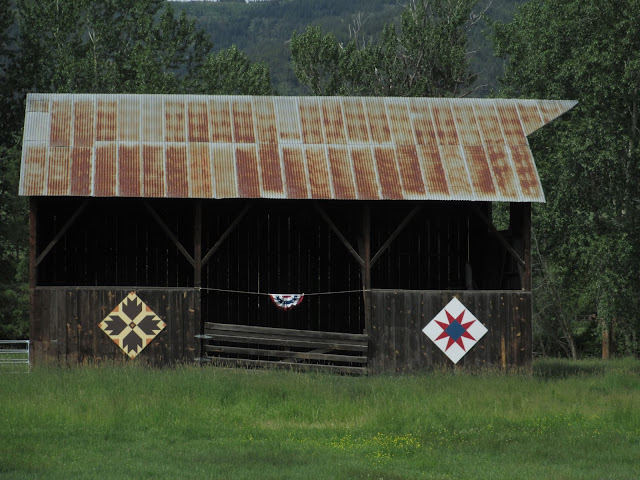 I reeeeally like this one.
It was a quick weekend, but completely enjoyable and beautiful.