The Mother of Invention

Since moving to our "new" place,
I have had a bit of a learning curve.

I am used to having healthy soil that has been tended to and
added to on a semi regular basis.
I am used to having the freedom of envisioning a project
and not having to ask permission to procede.
I am used to just planting things in the ground knowing we will be here
long term and knowing I'm not good with potted plants.
As a result of healthy soil, I am also used to being able to water and
having the ground stay damp for a while.
I am used to...... you're catching on right?
Weeeell, things are a little different when one is renting.
This is not our property.
I get it.
The thing is, we are living here.
It needs to work for us and our way of living.
Truth be told, we would take better care of it than what it is reflecting.
As a result, I have had to get a little "creative" in how I go about things.
We spend most of our waking hours at work or outside.
In the evenings, we like to sit outside
or meander around checking the progress of our favorite food plants.
It's been hot this past week or so.
In order to sit outside, we have been using our spare chairs and following the shade out front of the summer kitchen.
Then when I go to mow, I have to move things.  Erg!

Our outdoor patio/dining set has been stashed around the side of the house
where weeds have grown under and around it. Another Erg!
There wasn't a good spot for it. 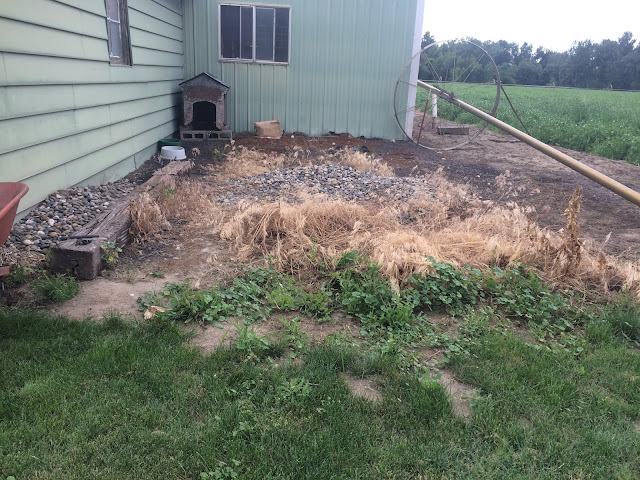 There is this odd corner behind the summer kitchen
where they dumped the extra asphalt (without leveling it, :-/)
a pile of river rock, and misc. garbage items.
(I can't believe I'm showing you this.)
This spot gets direct afternoon sun making it like an oven.
Yes, Ripster's dog house is back here, but he seldom is.
We just needed a place to park it and
a spot where he knows there will be food and water.
A while back I saw an idea on Grandma Donna's blog using cattle panels
so that she could grow beans vertically due to limited space.
(gdonna.com March 9th post)
I loved the design and the idea of a green wall
but wasn't sure how or where I could use one.
About a week or so I got sick of looking at the mess of weeds and rocks.
I pulled weeds like a crazy woman and began the slow hot process of moving river rocks with a bucket. 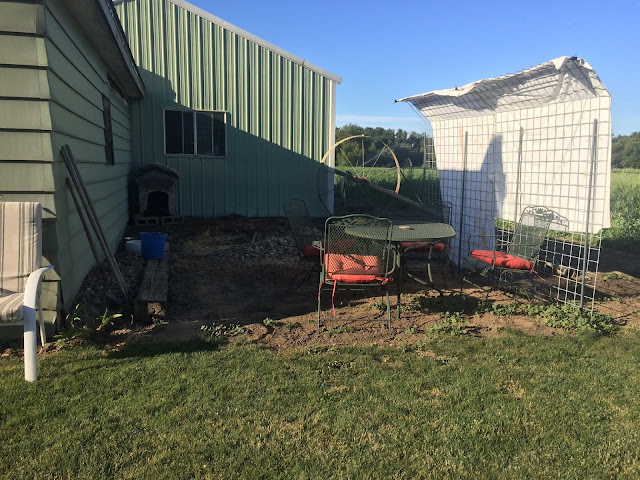 I might have ended up a little sun-burned,
but I did get enough of the rocks moved to bring the table and chairs over.
We had 3 birthday's and Father's Day to celebrate at our house Sunday.
We got the panels up Sunday morning.
That wasn't exactly enough time to grow a quick wall of greenery,
so I hung sheets over them.
It worked wonderfully. 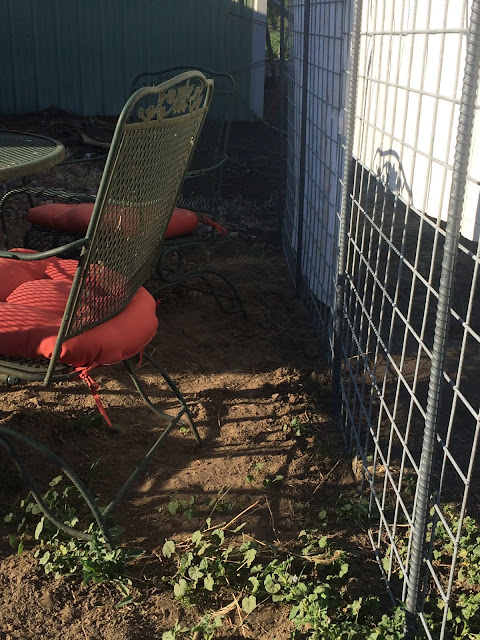 Instead of cattle panels, I used a panel called "high-five."
It was 5' X 16' and is a consistant 4"X4" grid
rather than the graduated grid of cattle panels.
It did require the trailer to haul as opposed to a pick-up bed,
but worked out price-wise and look wise.
I think I've just seen too many panels used for critters
to get used to seeing them on end.
(Or my OCD, pickiness, non-conformation, and..... kicked in.)
The plan back here is to get a few fruit trees and
keep them in large pots.
I will amend the soil at the base of the panels
and plant spaghetti squash to vine up since I have
a couple started in pots.
I have been working on getting better at growing things in contaniers.
So far, I'm still subpar, but improving. 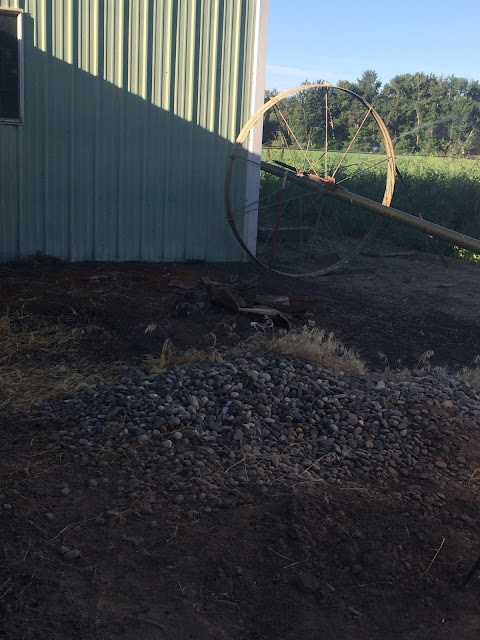 If I can turn this space into a little outdoor oasis, I would love it.
I don't mind amending the soil and leaving it better than we found it,
but plantings and structures can be expensive.
We can easily pull this up and take it with us.
Our plan (big wish, hope for the future) is
if we have fruit trees in pots even if they are small now,
they can add greenery for now and be ready for a perminant place
by the time we figure out where we want our forever house.
It looks pretty Shanty-town-ish at the moment.
(I love making up my own words :-)
You wouldn't believe how much garbage I've already picked up,
and there's still more there.
Do people not know there's a place for garbage besides the yard?
Anyhoo, I am hoping to be able to show you considerable progress
by late summer - we'll see.
For now, the project at hand is moving the rest of those rocks and
picking up and disposing of the remainder of the garbage.

PS~ We can't do anything about the wheelline
until Farmer Ted decides to move it to a new location.