It's all about the Food!

Recently, I popped over to a blog I enjoy but hadn't heard from in a while.
I left a quick message hoping all was well and wishing her a fine day.
She responded via email and her words were almost heartbreaking.
She had scaled down and felt it might not be very interesting, but what was really pressing
on her mind was the criminal dealings of doctors and Big Pharma. 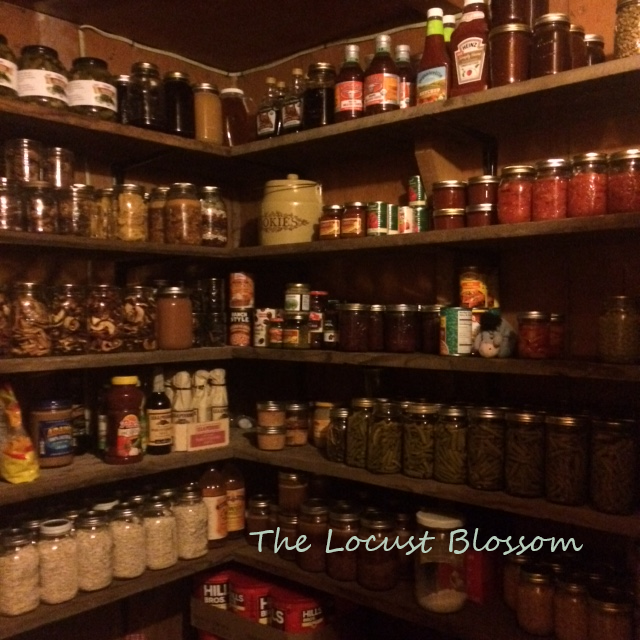 I would like to avoid political discussion here on the blog (please and thank you)
as it seems folks can't discuss it without deep emotional involvement.
I believe it was Mother Theresa who said she wouldn't participate in an anti-war rally,
but if they held a pro-peace rally, she might attend.
I guess that's what I try to do (all this time you were wondering, I know:-)

Hubby and I both work full time.
I would call our income average, though it's actually less than the national median
it is above poverty level.
I tell you those things so you know we aren't "special."
We are both away from home a lot and are not rolling in riches.
What we've done is quit taking mainstream as the correct path.
We walk our own path which just happens to look a whole lot like
how things were done for generations - that is up until about 40-50 years ago.

What we do:
We eat at home, at the dinner table, together.
It's just hubby and I now, but when the kids were home, it was the same.
If we want breakfast, we fix it.
We pack our lunch which is usually left-overs from the previous night's dinner.
Then dinner which is made to have enough left over for the following day's lunch.
Just what do we eat?
Well, that depends.  A few years ago, we had lots of peas so we had peas with many of our meals.
I actually kinda got tired of them.
But then last year, we didn't get any peas.  So this past winter has been pea poor,
and we have only had them sparingly.
We buy a grass-fed beef each fall which is our main source of meet.
When we talk to the butcher, we ask for the soup bones, oxtail, and heart.
We usually get the liver too, but have tried it sooo many ways and just can't seem to make ourselves like it no matter how we try so end up giving it away.
It's so good for us, we know.
We do hunt but aren't generally very successful.
This past year was an exception, and we did well.
That just saves us elsewhere.
When we do get something, we get any bit of meat we can from the critter.
Then we make broth from the bones.
We aren't about to take a life and waste half of it.
With bear, we also render the fat that makes the best lard on earth!
When something is in season, we eat it and preserve enough
to hopefully carry us through to the next harvest.
So what's on the grocery list?
Milk, eggs, butter, cheese and misc. fresh veggies.
Oh, and coffee, mustn't forget coffee :-)
I generally place a bulk order for olives and some spices through Azure Standard.
I use quite a few herbs in cooking.
This does two things.  It gets us more greens and it makes food delicious.

What we don't eat:
Grains, sugars, and chemicals.
Not never, but in general.
Based on our research, the food pyramid is up-side=down.
Humans can live on animal fat alone.
I'm right there with ya, doesn't sound very tasty and is opposite of what I was taught in school.
I've really had to work at making myself like "real fats."
The other big thing that has happened in the past 40-50 years is that
chemicals have inundated the food system.
The FDA approves them based on skewed statistics and/or labeling.
8 of the 11 food colorants are toxic and/or carcinogens.
That's just the colorants, not to mention the preservatives, fortifiers, emulsifiers, anti-caking agents,
and the list goes on and on.
Along with these chemicals has come an onslaught of health issues
from neurological (Alzheimer's, dementia, ADHD, autism, etc.)
to issues associated with obesity (diabetes, heart congestion/failure, cancer, etc.)
None of these appeal to us.
The typical argument is  "I can't afford to buy meat."
There are three things about this statement that don't jive with me.
1) Where and how do you buy it?  Individually wrapped by your local supermarket?
I can't afford that either.  Even if you don't have a large freezer, you can buy a quarter of a beef and save a tremendous amount over grocery store prices.
2) If you quit buying grains, sugars, and processed foods, you'll have lots of extra money - not to mention, you will feel full and more satisfied longer so won't eat as much.
3) Consider your medical expenses.  If you are healthy (or become healthy) how much would you save on medical expenses?
The other argument is that people have been eating grain for thousands of years.
My response to that is ~ it's not the same grain.
Modern wheat is poison, addictive poison at that.
There are other grains as well, but wheat is by far the most common.
I don't wish the farmers any ill will.  I know several, nice folks.
I just wish they would grow in a way that is healthier and more sustainable.
We are still human and prone to the temptations of certain foods.
A piece of fruit usually satisfies the craving, but every so often, we "cheat."
We say "cheat" only because we don't really know another word for it.
We have eaten a low-carb diet for about 6-7??? years now.
In that 7ish years, we have had 1 "cold" each.
(Mine was my own doing:-/)
Hubby has severe reactions in his joints if he eats wheat.
We went on a quick trip a couple weeks ago and stopped in for a cup of coffee.
There was a sign that said "local non-sprayed wheat" near some artisan breads.
He said he wanted to try some so we bought a loaf.
I can't imagine the look I gave him.
He usually runs and hides from wheat knowing how it hurts him.
So, that evening he had a slice of bread with his supper.
Next day~ no reaction so he had a piece of toast with his breakfast.
Over the course of a few days, we made it through the loaf (shared w/ friends.)
That pretty much confirmed what we already strongly suspected.
They spray wheat 10 days prior to harvest
so the plant will put its dying energy into the seed head increasing the yield.
Wheat is not washed prior to grinding so we are eating that freshly applied chemical.
Since it's labeled as an herbicide, no testing for human consumption is required.
I have contacted the maker of the bread and have arranged to purchase a small amount of the flour.
We won't go wild, grains are still sugars, but hubby is totally looking forward
to having some biscuits and gravy (one of his favorite meals.)

I know I don't have one of those non-abrasive, ever kind writing styles.
I probably come across as a crotchety ol' bitty.
I don't mean to sound unfeeling.
I know food tastes good (and that they add addictive chemicals to it.)
But if I can help even one person or family question their food choice,
I think it's worth it.
That is what I told my blogging friend and encouraged her to continue writing.
We are trained as a society to flow with the stream, no questions asked.
The more real information that is shared, real life stories
(like Mr. LB ate a piece of garlic bread for the first time in 7 yrs.!)
the more people might be willing to ask a question
and make a change in what is acceptable.

There is a film coming out (maybe out by now.)
Secret Ingredients, a film by Jeffrey Smith and Amy Hart
You can do a search and see the trailer.
It rather moving, especially as it relates to our children.
I've not yet seen it, and have no affiliation with it, but I'm interested in it.

This is a long post so thank you for sticking with me to the end.
I wish for each and every one of you superb health.
If you don't have that now, know there are ways.