Over the course of the past few years,
I have continually made and effort to work plastic out of our home.
I began with the kitchen since I really didn't want to be eating
whatever mystery chemicals were being leached from plastic containers.
Some things are easier to replace or do without than others.
I haven't used saran wrap for years, but one of my favorite pitcher bowls
with handle and snap on lid - well,
I still have that.
So it's a slow process, but it is moving forward.
The easiest rooms to unplastic have been the living room,
the main bathroom, and our bedroom.
But it seems there is still some trace of plastic even in each of those.
The computer, the shower curtain, the alarm clock...
I have figured out not to get worked up over such things but just do what I can.
The computer is actually in a closet, so I can shut the door when it's not in use.
The shower curtain is needed and used.
The alarm clock - I would love to do without, but. . .
Maybe it's just me, but I feel more grounded and relaxed
in rooms without plastic.
There is a certain "calm" that is present when plastic is absent.
Maybe it's the modern rush that plastics seem to trigger in our subconscious.
And so. . . .I continue.

Recently, I decided that our bedroom needed some attention.
Of all the rooms where one would want calm and repose,
this should be up there on the list.
Not that there is a lot, but it's there,
just hangin' out, sayin' "Hey look at me. Ha! I'm plastic so take that."
How rude! 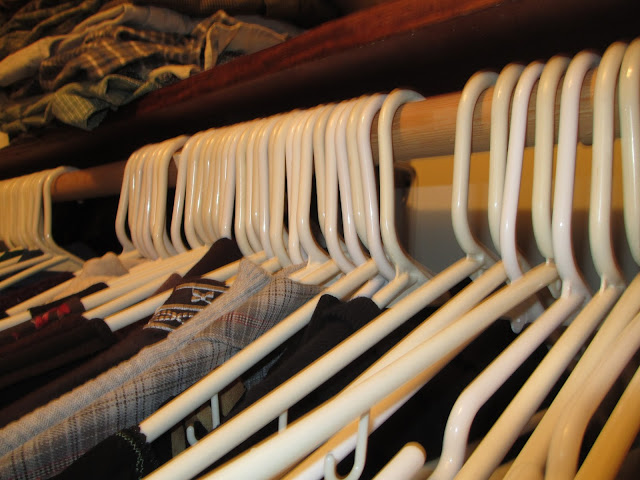 Doesn't it seem odd how we don't really see what we are used to?
I was straitening up and actually noticed all the plastic in the closet.
Yep, in the closet.
I've de-cluttered the closet (my clothes) before.
It was when Mr LB said we to buy more hangers.
Instead, I went through my clothes and got rid of a bunch.
After that initial purging, it's much easier to get rid of clothes that are stained, damaged, or just don't fit right.
It seems funny now.
Why was I so afraid to get rid of them?
How ridiculous.
Now even though there are far fewer clothes,
there are still too many and all hanging proudly from white plastic hangers - Ouch!
How did that happen?
The really sad part is a couple years ago when my grampa passed away,
Mom asked me if I wanted their wooden hangers.
I said no so she took 2 black garbage bags to the thrift shop.
At the time we were getting so much "stuff" we just didn't want more.
The good news is I called the thrift shop.
Patty said, "Come on in.  We'll see what we can come up with."
So I went in and got wooden pant hangers -
the good sturdy ones!
There were a few regular ones for shirts, which is what I needed most of.
There was also a basket of the ones that were crocheted. 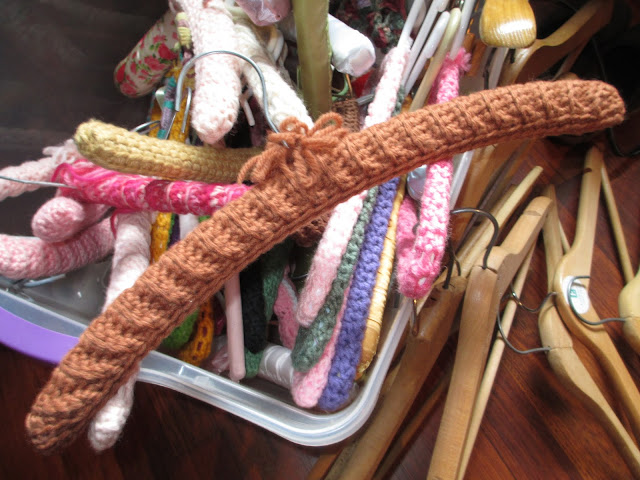 You know the ones.
I asked what she did with them.
She said they usually go in the garbage - so I got them,
knowing what they were.
Once home, I began with the pants.
As I took each pair off the plastic and put it on the "real" hanger,
they gained something.
A couple pairs didn't even go back in the closet.
I don't have fancy, expensive clothes,
but there's dignity in being well cared for.
If I ever get to retire, half the clothes in there will go away.
Until then, I have office clothes and home clothes. 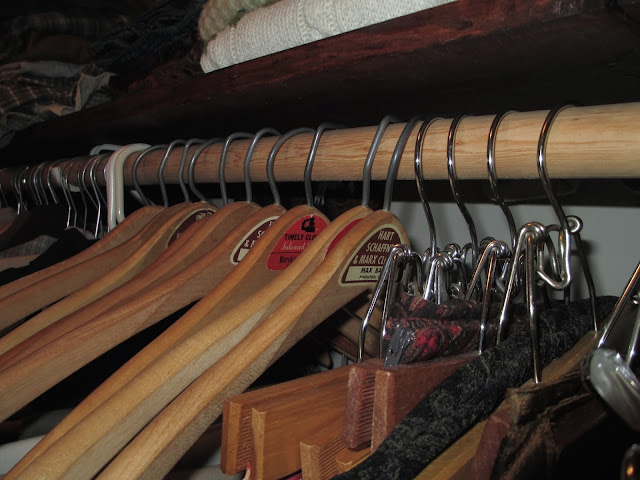 I'm not through the shirts yet, but have already eliminated about half dozen.
What about those crocheted hangers?
Well, I have scissors and have cut the yarn off
to reveal the treasure hiding within.
Some of them are wonderful reminders of times past. 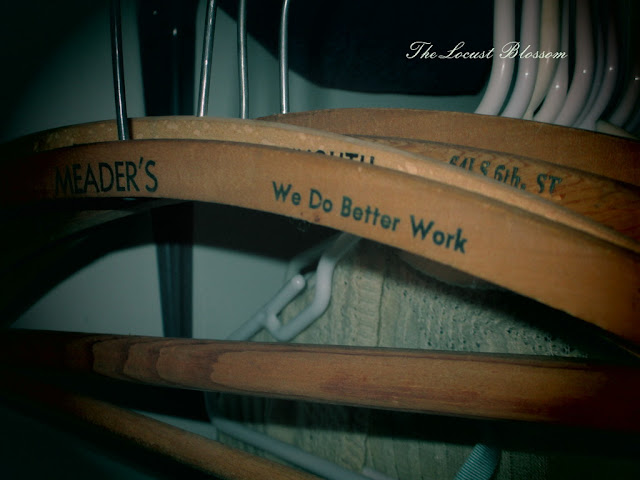 It was a little tedious, but they were free so a little tediousness is okay.
I'm grateful for them.
I could go out and buy all new hangers, but I would be out the money and probably wouldn't have the same appreciation for them as I do this way.
Now when I walk in the closet, I notice - really notice.
It's strange how things invade our lives and we don't notice.
More and more, I'm trying to notice those little things and
create an "intentional environment."
As I do, I take care of whatever it is and gain another level of peace.
That saying (cliche) "A place for everything and everything in its place."
There's wisdom in that.
Peace in it.
We still have a long ways to go, but each step closer lets us know we are headed in the right direction.
The less we have, the easier it is for that to happen.
Even using all these words,
they seem inadequate to express the feeling I'm after.
But have you ever visited someplace, and upon walking through the door,
you feel like "Ah yes, this is it.  I'm Home."
You feel like you could just pick up your life and live there?
That's how I want our home to feel.

How 'bout you?
Is your home your sanctuary?
Or is it someplace you dwell?
I'd love to hear your thoughts on the matter.


PS~ About this time of year, I like to put a little cedar oil on a rag and run it along the bar of the closet and the underside of the shelf.  I also take my sweaters and put them in the dryer for a few minutes with a few drops of cedar oil on the dryer balls.