A couple posts back I showed you a mystery squash that we purchased for $3.
You can see that post here. 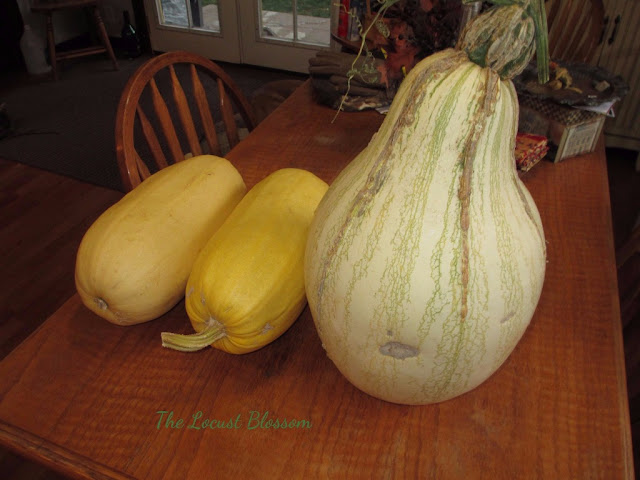 Here's the picture of it.
It's huge!
After some input from you kind folks,
we figured it was a cushaw - or close.
Upon research (because that's just what I do) I learned that the cushaw is referred to as the sweet potato pumpkin.
That concerned me just a little
as I'm not fond of either sweet potatoes or pumpkin.
This evening, I finally decided to break into that big boy.
The shell / rind is tough as nails.
Just getting the neck portion cut off was a workout.
The meat however is tender.
The fragrance smelled like watermelon to me which actually worried me a little.
I was preparing myself for something ultra sweet.
The first small batch, I had sliced about 3/8" thick and dipped in milk
then shredded Parmesan.
I fried those in some of our home rendered bear lard.
Man oh man!  It was delicious!
The second batch, I didn't even bother with the milk or cheese.
Just a sprinkling of salt and we gobbled them up.
It does have a slight sweet potato flavor but not the overwhelming flavor
of regular sweet potatoes.
It is/was almost like a cross between a potato and sweet potato.
We will probably be eating on this cushaw for about two weeks!
The next thing I did was clean out the "belly." 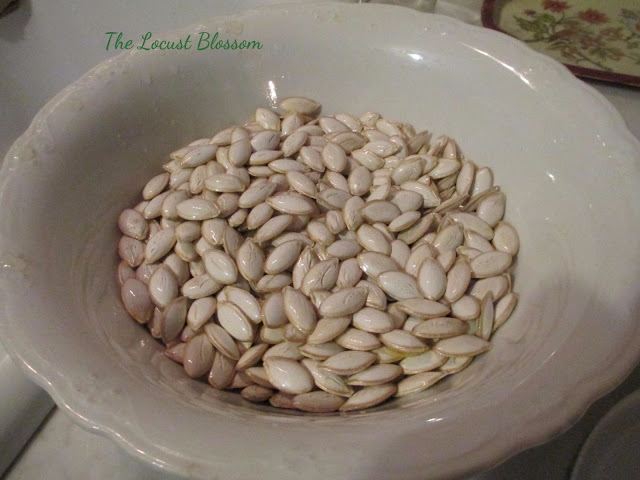 The seeds are even huge - and a ton of them.
I am saving some to try to grow, but I will roast the rest of them.
As much food as we are getting from this one squash,
I can't believe I've never heard of them.
Also, I can't believe they are not more widely promoted as
a cost effective way to eat or feed a family.
They store easily though from what I've read
not as long as some other winter squashes.
These store up to 4 months.
So far, the only thing that is a bit of a deterrent
is how difficult it is to break into.
I am making arrangements to get a couple more.
So all of this from someone who's not a squash fan.
I can't tell you how thrilled I am with the discovery of this mystery squash.
And healthy to boot!
Posted by Lady Locust at 6:49 AM