Well, it seems I'm not the only one

who has had a bit of a rough go of things lately.

My dad ended up back in the hospital for a few more days.

He is now home again.

We stopped by yesterday, and he is looking better - yay!

He is also getting grumpy about meds and all the fuss

The month of August, he spent 24 days in the hospital.

Mom was only permitted to see him once during all that time.

The rest of us were not permitted at all -

nor were we allowed to call for a period of time.

To me that is inhumane.

I am sooo grateful he is home and improving - again. 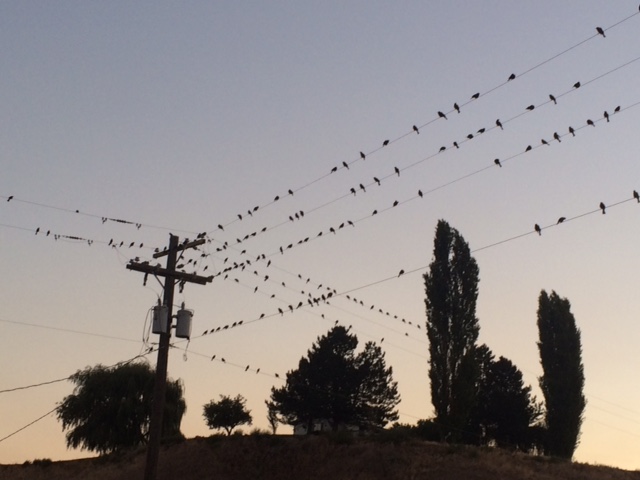 The blackbirds are flocking at sunrise ~ the introduction to autumn :-)

Our garden is going bonkers.

I know many of us are preserving the harvest right now.

I had several humungo heads of cauliflower that

are now all blanched and frozen in meal sized portions.

The tomatoes are insane.

I have canned almost enough for our own use.

Mom hasn't had much time to do much canning

so I canned a dozen jars of diced for her

and will give her some for juicing and making into sauce.

I will probably do another batch of diced for them as they ripen.

The rest will be shared 😊

That of course is part of the joy of a garden,

the sharing of the bounty. 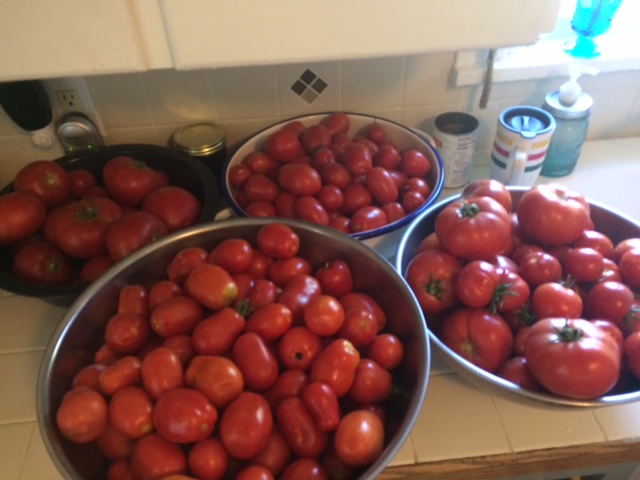 This is just one round of several.

Work has been insanely busy, long days and short nights.

We've all been to the point of nearly complete exhaustion.

Hubby was 'rummy' he was so stressed.

Between family and work and trying to maintain our own living/home,

I actually asked him if he tied our trusty K9 companion one evening.

I went out and tied him, then came in and told Hubby I tied him.

He said Oh thank you.

Not 2 minutes later he went outside.

I asked what he was doing.

He said he went out to tie up the pooch, but I'd already done it. Oy!

So we took what we could get and went camping.

We left Friday late afternoon and came back Sunday morning.

There is no service at one of our favorite spots not terribly far from here.

I told Mom where we would be and how to get a hold of us if need be.

Unluckily, the propane regulator went out on the trailer

so it took over an hour to make a pot of coffee!

But luckily, we had the little propane stove since there is a fire ban

during the dry months so we were able to get our fix.

Hubby caught 3 trout over 12" and several smaller ones

That's more than he's caught all up in the past year.

He also took a nap Saturday!

I took my stitching along and actually got to sit and stitch.

Needless to say, it had been a while.

We are back at it now, but that little break did wonders for us.

We had lots we could have done,

but sometimes sanity is worth more than plum pickin', weedin', cleanin',

or a million other things calling our names.

I heard a saying many years ago~

When your basket is empty, you have nothing more to give.

So many are dealing with life issues

be it societal changes, health, relationships, or preserving the harvest.

If you are among them, take a moment,

even just a walk out behind the garage and look up to the heavens.

Inhale as deeply as you possibly can and hold it for just a minute.

Let it fill you up and give you strength for the day.

Prayers for you all.