Another Aspect of Preparedness

As I mentioned in our last post, we were without power Christmas Day.
Being without power isn't surprising to us as it goes out on a semi-regular basis,
and during any time of the year.
You might say we are prepared for it. 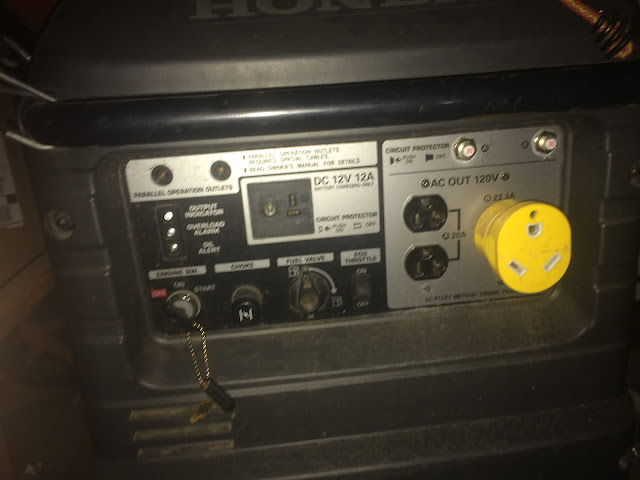 (Sorry for the poor pix, but this was taken by flashlight.)
We keep a generator and fuel for it.
We have a wood stove for heat and can cook on it if we need to (or want to.)
We have a barbecuer that we can cook on as well.
The thing is, even with the generator, we end up with extension cords going from hither to yon.
As we age, dragging those cords around might become more difficult rather than just a nuisance.
They are also a tripping hazard at any age.
As folks were getting ready to leave Christmas Day,
I caught my father-in-law in the utility room.
He had spied the breaker box.
He couldn't reach it since it's above the dryer so asked if I could open it.
I grabbed a flashlight and reached from the side to open it.
(He was trying to be polite and not move anything.)
He is a retired electrician and stays up on codes and such
so he can help various friends and family.
This time it was our turn.
He asked if I'd like to just flip a switch to change the load to the generator.
Well, I'm not a complete dummy head.
Of course I'd like that.
So he picked up the required parts, and they returned this weekend.
Mother-in-law and I chatted while I fixed lunch, and the guys worked
one outside and one inside to get wires where they needed to be.
Did you know that it's a challenge to cook
when someone keeps turning the breakers off😂
Within an hour or so we had an alternate power source.
It will power our water pump, living room, and kitchen.
Father-in-law was surprised at how little "the pull" was.
He said we weren't using much power.
Mr. LB laughed and told him, "Sweetie's all over that."
F-I-L said we could probably have powered the whole house.
As is, the only thing in the living room and kitchen that won't run on the generator is the oven.
Once our ground defrosts (spring,) I might poor a concrete pad
where the generator hooks up.
For now we will move it back and forth with the hand truck.
If it makes its home on the side of the house permanently,
we will want it covered and bolted down.
We are not "preppers" by today's definition.  We are not militant.
We don't foresee a zombie apocalypse.
But we do like to be prepared for those situations we know we'll face.
This will just make our "power's out" routine a little easier.
Since we are thinking about retirement and what we will need as we age,
I suppose we are truly "middle-aged" and no longer have any claim on youth.
Bummer!
We've already decided that if we ever move, we will have a single level home
at ground level with wide doorways to accommodate walkers or wheelchairs.
Mr. LB's sister is in a wheelchair
so it gives us a good feel for designing around it
(not only the doorways but the space needed to turn etc.)
It might sound odd, but thinking of these little nuances now
might just make life easier at a time in life when we won't have the energy or physical strength to make the changes.
Posted by Lady Locust at 6:55 PM