Every so often, it seems like if I don't just share all the random
things that are going on,
you might wonder how we got from point A to B.
In that light, I'd like to share a few things
that are just 'a day in the life' so to speak. 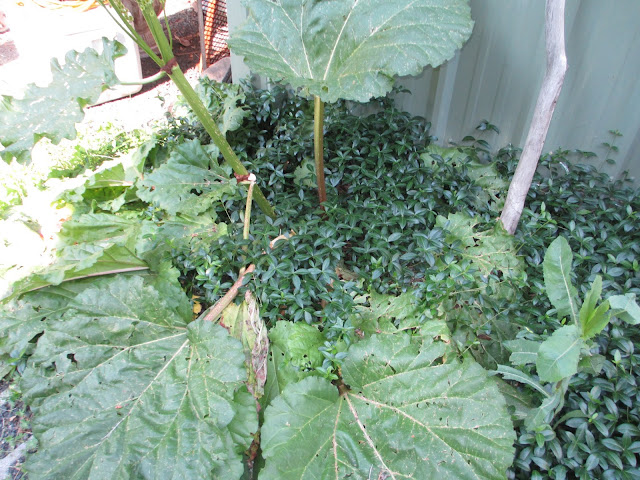 Last weekend, we had a huge hail storm.
The larger than pea-sized pellets seemed to be shot strait down
from the sky.
It thrashed our rhubarb, breaking stocks and shredding leaves.
The volunteer borage was also shredded.
Luckily, most of the other things in the garden were barely sprouted
so suffered minimal to no damage.

The tomato plants are still pretty small, and I had not put them in the garden
yet so was able to tuck them under a bench to protect them a bit.
Some of the leaves appear to be bruised,
but I am thinking they will recover well enough.
Nearly all of the garden is in and sprouted.
I will add a few more things as we go -
like radishes that are quick, or a second round of green beans
so they aren't all demanding canning at one time, etc.

The chickens (pullets) are getting braver.
They think the sitting area is there for them.
So far they have been good and have not discovered the garden.
I was told that if we don't give them kitchen scraps
they won't bother the kitchen garden since they prefer bugs and slugs.
So far they have been on an organic chick ration and free range.
I move their little coop to follow the lambs. 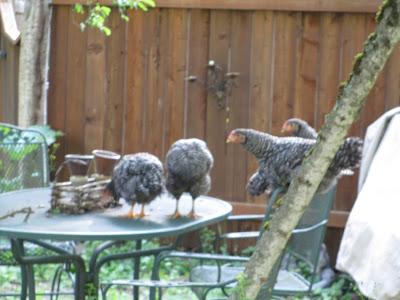 We have been having a raccoon come in and clean out the cat food
so we set a live trap for it before it discovered the chickens and garden.
At 12:45 AM Saturday night/morning we caught it.
I am venturing into tanning the pelt.
Will have to share more about that in a future post.

Yesterday, was attack on weeds day.
I weed-eated, pulled weeds, mowed weeds - whatever it took,
while Dad and Mr. LB went after a tree.
A little after 4pm, they still weren't back so I headed up the mountain
to make sure all was well.
It was a tree Mr. LB went to fall last year then ended up getting his wedges
stuck so left it hoping Mother Nature would take care of it for him.
It was in a place only a crazy person would climb to
so he wasn't concerned about someone else getting it or them.
Mother Nature didn't do it so he had to.
They were just finishing up when I arrived (good timing:)
It was a heavy load, and puts us that much closer to having enough
for next winter.
We like to get wood in the spring before they close the forests down
due to it being dry/fire hazard.
Many folks wait until fall then are rushed to get enough in before the snow flies.
We usually have plenty to do come fall with trying to get the harvest
all taken care of and preserved for winter.

It really is a cycle.
As we move through this season, we are preparing for the next.
Peas will be coming on within a month, and we will begin the canning season.
We've been on the go from one end of the day to the other
and still have plenty to do when we call it quits for the evening.
It's a good tired though, and we sleep like rocks.


I've read both books and this is the same canner I use year after year.
A good all-round homesteading book and a couple "tools"
are all you need.
Posted by Lady Locust at 6:18 AM