The Other Big Project~(Vintage Trailer)

Mrs. Calabash?
Is that you?

Back here, I shared that we usually have a couple big projects
going at any one time.
The bricks still aren't finished, but they are getting closer.
The other "big project" has been to restore Mrs. Calabash.
You can see more about her here and here.
Once we got the necessities in order, we came to the point
where a decision needed to be made.
She needed to be re-sealed which involves removing all the windows,
J-channel, eyebrows, trim, etc.
Did we want to go through all that just to have to do it again
in a year or two when we refurbished and painted her?
We chose to just do it all now.

We pulled Mr. LB's old project car out and tarped it.
Then Mrs. Calabash got the place of honor in the shop. 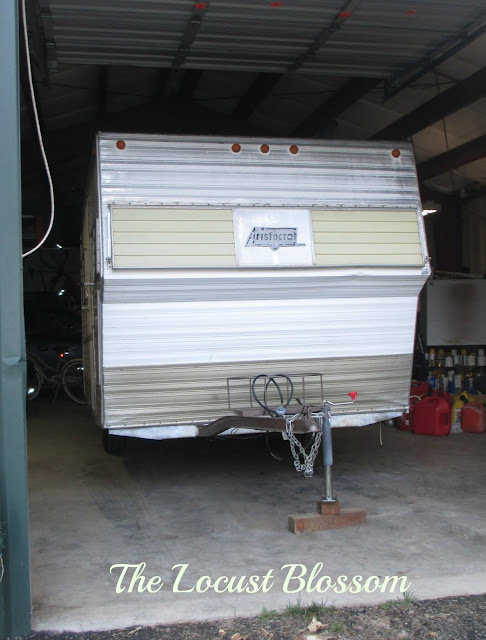 At first it seemed like we just kept pulling her apart
and that nothing was being fixed,
which of course is part of the process.
Also at first, I was doing it myself, but it didn't take long for Mr. LB
to take pity and dig in too.
I started by removing the lower sections of skin (siding)
to see what was under there.
Then, all the trim, windows, and J-channel came off.
I won't show every detail, but enough that hopefully
you can see just what we've done. 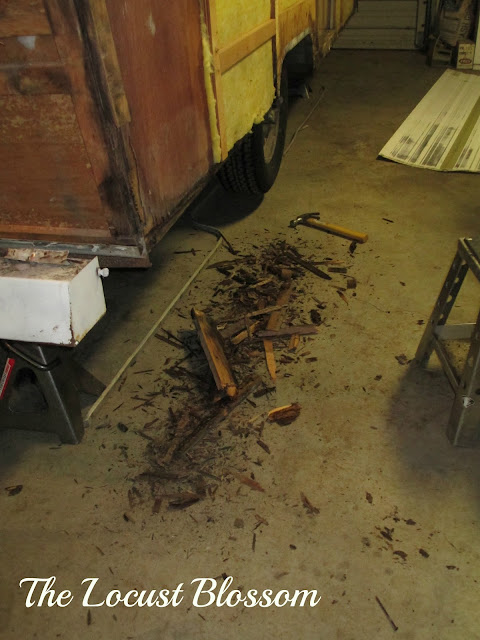 From the first Aristocrat I saw, I was drawn to them.
I like their floor-plans and generous windows.
They do however, have a design flaw.
That bottom skirting board is exposed and sandwiches the paneling
so the water wicks right up and holds.
In researching ways to fix and prevent it from happening again,
I learned that deck sealants (and the sort) can react with the aluminum
so those were out.
The only thing that could possibly work was the black, smelly,
gooey, sticky, tar paint/sealer. 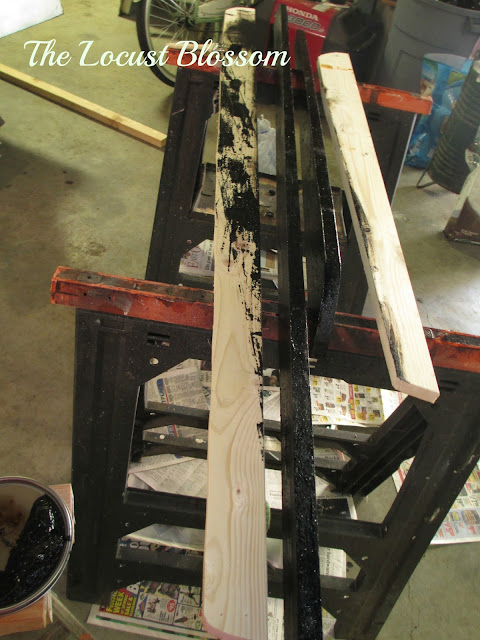 New skirting boards getting their icky coat of tar paint.
We had to take off more skin than I had initially thought,
up to the roof so everything could be "right."
More on that in a minute. 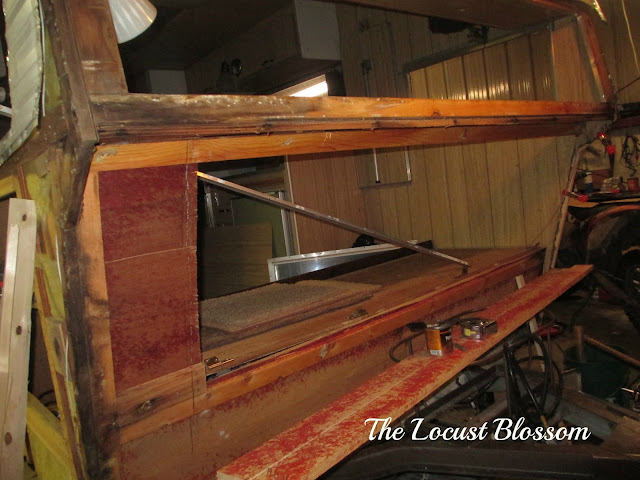 One corner of interior paneling was damaged on the back passenger side corner
so I robbed the section from the front, behind the couch
leaving a nice big hole here. 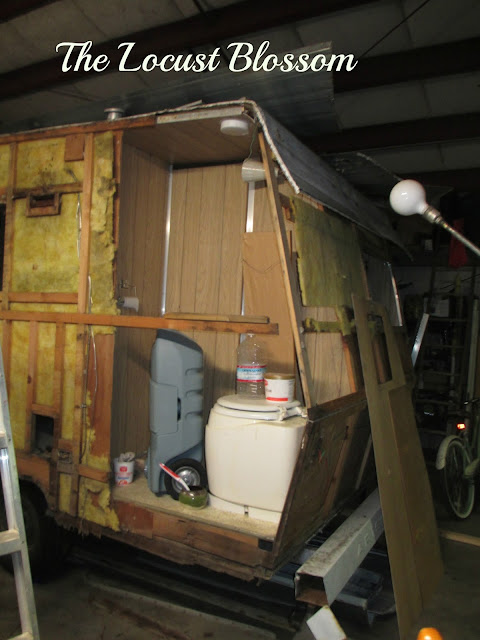 Here's that minute, from a minute ago:)
At one point someone had tried to "fix" the bathroom corner
using incorrectly sized lumber and fencing staples!
so it had to come out in order to make it right.
At this point - right here - I almost cried.
She kept coming more and more apart.
Nothing was going back together yet.
This is the driver's side rear, and I couldn't make enough paneling for it,
so I did the next best thing.
We got white bead board and I antiqued it. 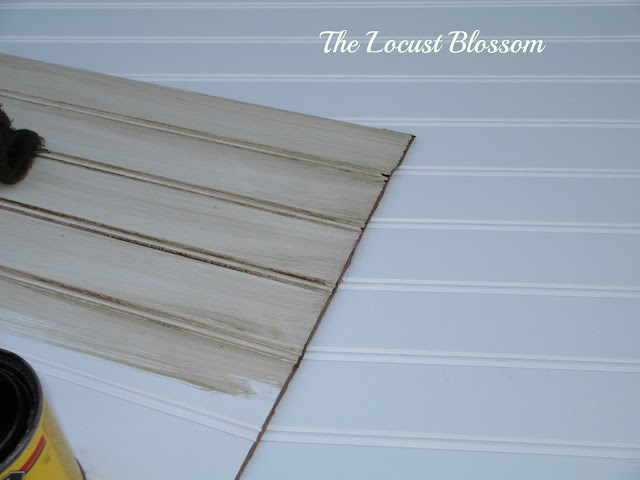 I was pleased with how well it turned out and how closely it matches.
(They had used a mauve and country blue floral el'cheapo paneling.)
I did the same with a piece of 1/4" plywood for the front
where I robbed the real paneling. 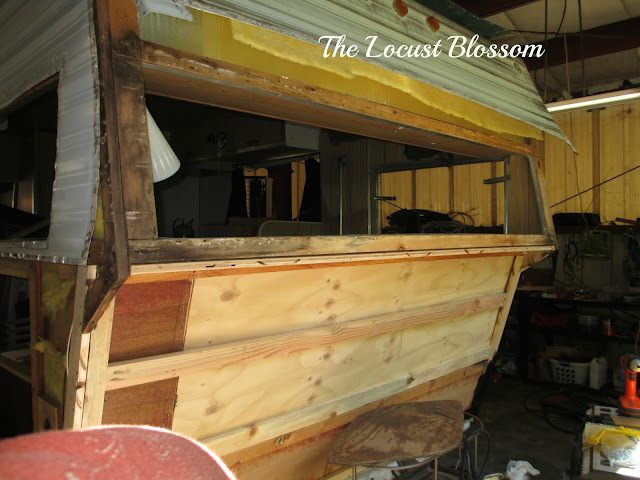 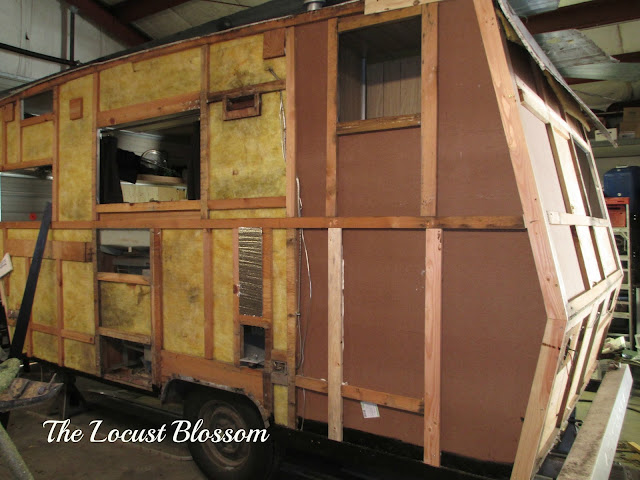 You can see here, we also replaced several of the boards across the back that were not as sound as they could have been.
At this point, I actually went around her with the tar paint
and painted all the corners and any nook or cranny
that I thought might be prone to moisture.
Also, the yellow batting that provided about as much insulation as a paper towel, was removed where we had to work but left where we didn't.
It really is that thin.
Over it or instead of it (depending upon where) we added rigid R5 insulation. 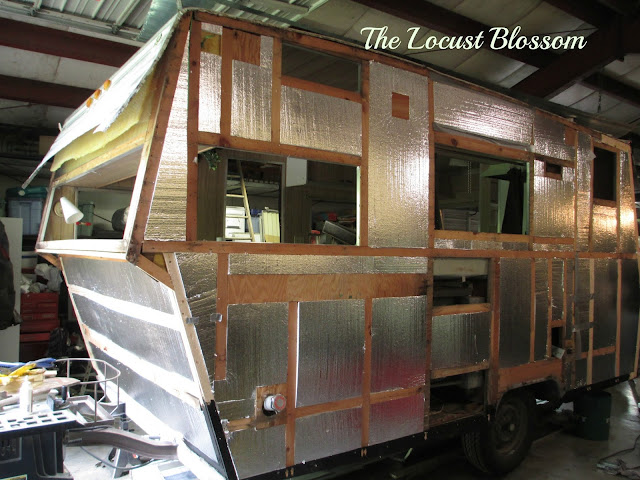 I can't even begin to express what a relief it was
to begin to see her starting to come back together.
Once all the insulation was in place, we began putting the skin back on.
That sounds easy enough, but getting it back on just right took time.
1/8 of an inch off in one spot can result in an inch off in another.
We were aware of this so made sure everything was right on as we worked.Luckily, that didn't go to terribly, though when we went to put the door back on, there was a bit of a bow in the wall as a result of having no additional support from doors or windows for the duration of the process. 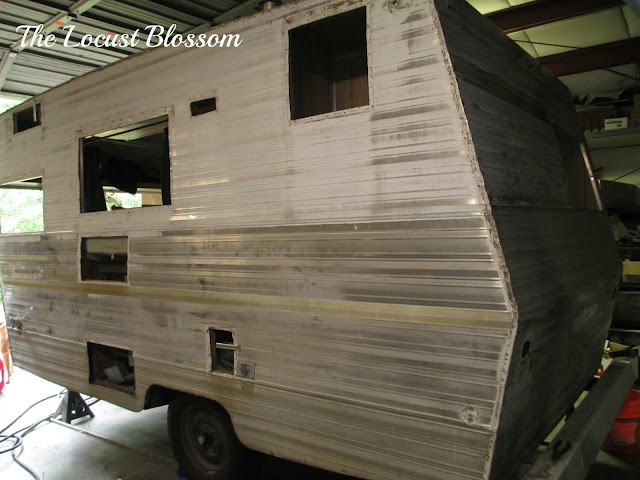 Once we got the skin back on her, we got to sand and prepare for painting.
We were going to paint her ourselves.
My thought was that if someone else makes a run or does a sub-par job,
I would be pretty upset.
If I do it, I can only be mad at myself.
As it turns out, Mr. LB knows a fellow fisherman who does this for a living.
We talked about it and decided to let him paint her.
My comment was only, "Please let him know that this is advertising for his business - good or bad, it's up to him."
I think he told him something along the lines of, "This is my wife's baby, and I want to be able to walk again after it's painted."
Okay, not really, but he knows I want her done nicely.
I'm really not that mean (Well, most of the time.  Maybe don't ask my baby brother that question. :) 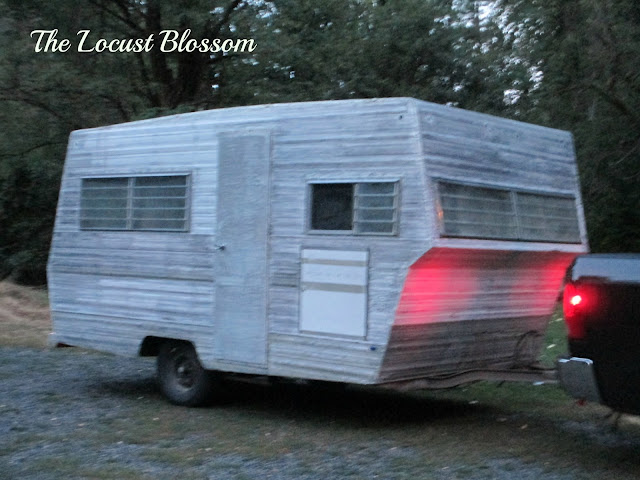 And here she is on her way to "the beauty parlor."
Sorry the picture is a little fuzzy.
This is about 5:30 AM, and it was barely light enough to get a picture.
We had to put the windows back in so that she could travel
the road to get her there.
We just put a half dozen screws in each and will pull them back out
in order to mask and paint.
She's on the docket to get the main body color Thursday,
then the accent color Friday.
Then, once she's back home, we'll get to seal her back up
with new putty-tape and all the trim, which I have been polishing
by hand all along in my spare time.